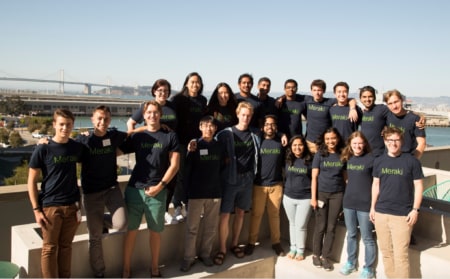 Impact, growth, mentorship, and fun: these are some of the words used to describe Meraki’s 12-week internship program for Software and Hardware Engineering.   From May through August, Meraki hosted 21 interns from 13 different schools around the United States. Our interns had the opportunity to design and develop new features and products for customers around the world. Working directly with our engineering teams, interns gained valuable hands-on industry experience in preparation for their roles after academic life. In addition to working on their own projects, our interns were also able to enjoy fun events: from social activities and technical meetups to a weekly lunch-and-learn series, to name a few.

We sat down with Carly (Caltech), Sonja (Northern Illinois University), Ani (Rice), and Hemanth (BS-CMU, MS-Stanford) to hear more about their time as Meraki Interns.

How did you hear about opportunities at Meraki?

Carly – I first heard about Meraki at Caltech’s career fair. I read up on Meraki’s business and was very interested in networking, so I applied for an internship.

Hemanth – I first heard about Meraki at the CMU career fair when I was a senior, preparing to graduate. I interviewed for a full-time position but decided to attend graduate school instead. During my first semester of graduate school, I had to start thinking about summer internship opportunities. I reached out to a university recruiter at Meraki, and after an interview, I ended up with an internship offer!

Carly – The internship interview process was fairly straightforward: a phone call with the university recruiter, and then two coding interviews. The coding questions were really creative and I still remember them, a year later. They were so fun I forgot I was being tested on algorithms and just focused on solving the prompts.

Ani – My interview experience was absolutely amazing. I think it was significantly different than most others I have experienced before because it wasn’t as formulaic. When you apply to a large company, the process is generally the same. You get scheduled for two technical phone screens, then another general technical interview, then some team matching, and so on and so forth. On the other hand, Meraki’s interview process felt a lot more personable. Starting off with first talking to a university recruiter to get to know more about the organization and culture, before moving into the technical interviews, meant that as an applicant I knew who I was talking to and what I was interviewing for. In addition (as cliche as it sounds), the entire interview process felt more like a series of conversations than interviews. 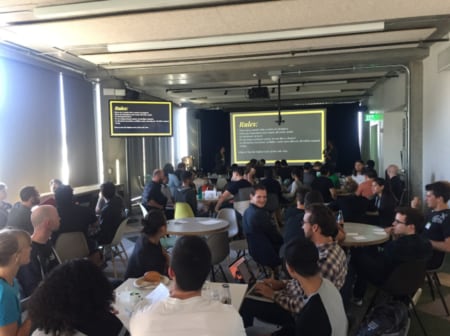 Competing in a friendly trivia night

Why did you choose Meraki?

Ani – The people. Everyone I talked to and met before I started at Meraki was absolutely amazing. Everyone was intelligent, dedicated, and passionate. All of the engineers I met really believed in Meraki’s mission and wanted to make a difference. Meraki culture is really special and I could tell even before I started that it was where I wanted to be. In a more objective sense, Meraki also had a smaller engineering organization which meant that as an intern (and maybe one day as a full-time software engineer) I could have a larger impact on the organization and the products. This sense of organization-level impact was extremely important to me and became yet another driving factor in helping me make my decision.

Sonja – I chose Meraki for a couple of reasons. One was that I was really drawn to the industrial design of the products. Looking at the hardware and packaging, I could tell that there was a high level of care that went into the products. I was also impressed by the opportunity and autonomy I would be given as an intern working on a summer project. I wouldn’t be doing menial, busy work, but actual engineering, so that was really exciting. And of course, who wouldn’t want to spend a summer in San Francisco?

Which team were you apart of this summer? What project(s) did you work on?

Hemanth – I worked on the Backend Infrastructure team. After a couple of days spent improving some internal documentation tooling, I moved to my main project: building a brand new monitoring feature for our support staff, with a potential future rollout to customers. I got to work across the entire stack to create this feature, from creating a backend service to building a UI, so I really got to explore a bunch of different technologies and do a lot of interesting things.

Carly – This summer I worked on the Exploding Whales team (also called the Backend Team, but mostly called the Exploding Whales). One project involved working within our aggregation framework to make an approximation query run faster. We approximate the top clients in a network over time by throwing out low usage clients in any given day. We can actually prove an upper bound for the error that this approximation gives us. For our parameters, it’s 3.3%. My other project was part of a larger effort to more accurately identify clients throughout the Meraki dashboard and across multiple devices. I worked with my mentor on figuring out how we identify clients throughout a network and then I worked on making sure we counted up their usage correctly, especially in the case that the client is seen through multiple Meraki devices.

Each intern is partnered with a mentor for the summer. What has been the best part about working with your mentor? About your team?

Sonja – Everyone on the Hardware team is great. Everyone has so much knowledge in so many different areas, and they are always willing to take time to answer any questions you might have. The team is also very friendly and welcoming, and made me feel like a part of the team from my first day, and not like “just an intern.” My mentor taught me so much about how to be an effective Hardware Product Manager. He was also always willing to answer any questions I had, no matter how big or small, and give me pep talks when I was frustrated with my project.

Carly – The best part of working with my mentor is that I’m actually working with her. My project dovetails nicely with hers, and I’ve enjoyed the back-and-forth discussion on how our projects need to interact with each other. It also turns out that my mentor and I have similar interests and habits, so it was fun bonding over that this summer. The best thing about my team is its team spirit and love for food — we’ve had delicious team lunches and gone out to ice cream several times.

What was your favorite event this summer? Why?

Ani – The Meraki Open House was a lot of fun. The event allowed for a change in pace and for me to take a step back and remember the big picture that surrounded both my project and my team. It was a lot of fun showing off everything we were working on to the rest of the company and the community. It was also really neat to see and hear about what other people on other teams were working on.

Hemanth – I really enjoyed the day we rented out a nearby soccer field and had a full soccer game with both interns and engineers participating. It was exhausting, but every single player walked away with a smile on their face :)

Sonja – My favorite Meraki event was probably when we made the succulent planters. It was a nice break in the afternoon, and then I had something pretty to look at on my desk the rest of the summer. Plus I got a great Instagram post out of it :) 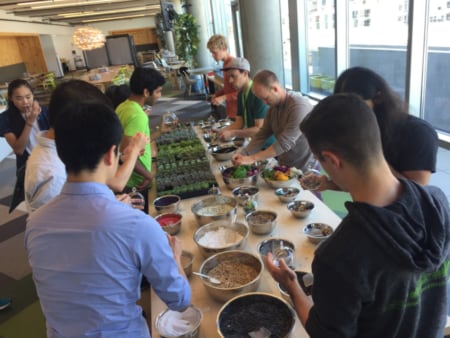 If you could give one piece of advice to future student applicants, what would it be?

Hemanth – Don’t be shy when you come in to interview! Every single interviewer I had at Meraki (as well as every engineer I’ve worked with) has been personable and friendly (which is definitely not the case at all companies), so take the opportunity to strike up some conversation so that you can get to know each other.

Sonja – Be yourself and don’t be afraid to show your personality and talk about what you are passionate about. Meraki is full of passionate people, and as an intern, you should demonstrate that same level of passion for your work.

Carly – Every team at Meraki works a bit differently, and it’s hard to know what the differences are from the outside. The recruiters and team leads do a great job of matching people, though, so the more candid you are about what you want, the better!

Thanks for chatting with us Carly, Hemanth, Sonja, and Ani!

Interested in opportunities at Meraki?  Find us on campus or check out our open positions at meraki.com/jobs! 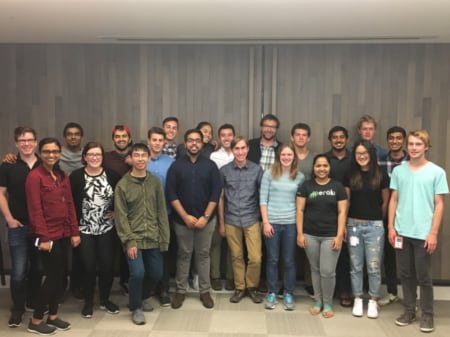 Our interns had the chance to sit down with Meraki GM Todd Nightingale!