Today, we’re thrilled to announce an innovative new feature that makes troubleshooting and support more intuitive, provides even greater visibility into networks, and is available out-of-the-box with no additional configuration or licensing needed: network topology. This feature automatically maps your network deployment, shows direct and redundant links across wired and wireless infrastructure, and is essential for troubleshooting network issues that would otherwise require manual mapping, overlay monitoring software, or keeping track of MAC address tables.

Network topology is available for all Meraki customers running combined networks with Meraki gear (MS, MX, or MR), or for customers running uncombined switch networks. To reap the full benefits of topology, however, Meraki MS switches should be deployed.

You can find the topology feature in combined networks under Network-wide > Topology in the Meraki dashboard; otherwise, check Monitor > Topology in your uncombined switch network.

The network topology feature intelligently maps equipment in your network, giving you a hierarchical, physical layout of how your gear interconnects. There are several things you can do with network topology, like searching for network devices by name, tag, or device type to quickly view how equipment is deployed.

Looking at gear in a corporate network tagged “guest,” and running a guest SSID or guest VLAN. Gear not meeting our search criteria is automatically dimmed.

In the topology view, squares represent MX security appliances, rectangles represent MS switches, and circles represent MR access points. Non-Meraki equipment is also detected if it is one hop away (and will appear as an empty diamond); depending on the protocols supported by a non-Meraki device, the topology view may be able to discern LLDP data like model type, IP, and manufacturer.

You can also quickly see alerting or disconnected equipment that may require additional troubleshooting, and (if the alerting device is a Meraki AP, switch, or security appliance), click into that device to troubleshoot further. 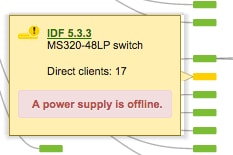 An alerting Meraki MS switch, telling us it’s having a power supply problem.

Learning which physical links in your network are most heavily-trafficked is also easy; simply hover over individual network links to learn statistics about that connection’s negotiated speed, usage, and number of directly connected clients using it in the past day. If you are trying to diagnose physical bottlenecks in your network, there is no easier way to find it.

You can even see if either a link or specific switch ports have been blocked by the Spanning Tree protocol (STP) to help prevent data loops. 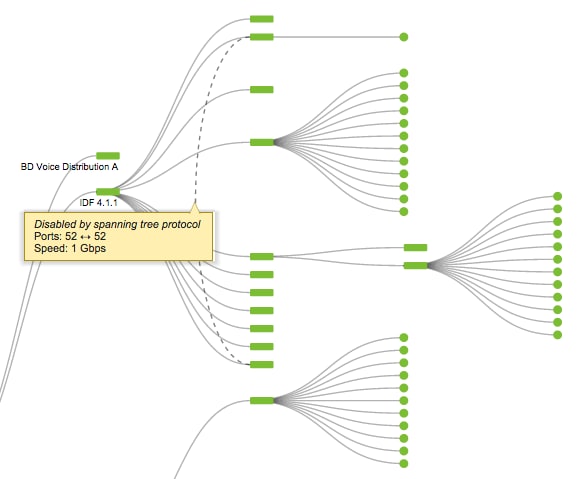 By default, if entire links have been disabled by STP, they will be hidden from view. If you opt to view all physical links—not just those currently forwarding traffic thanks to STP—all you need to do is select the checkbox to “show redundant links.” 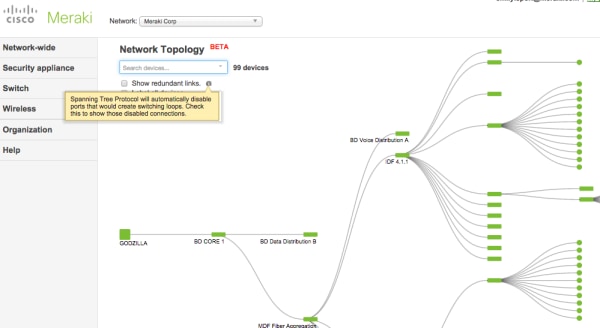 There is no need to schedule a firmware update to have topology functionality; the tool is now live in the Meraki dashboard.

To have the full functionality described in this post, a Meraki MS switch must be deployed in the network—without switches, visibility will be restricted to devices that are a single hop away from MX security appliances or MR access points.

Topology shows non-Meraki equipment, and depending on the protocols supported, useful information like model, IP, etc.

To sum up, we’re really excited about our new network topology feature and want to hear what you think. Please reach out or make a wish and give us your thoughts!