As part of our Cisco Meraki MX summer feature release we are thrilled to announce warm spare redundancy for MXs deployed in NAT mode, one of two modes a Meraki security appliance can be configured in (the other being VPN concentrator mode). Warm spare redundancy had previously been limited to MXs deployed as VPN concentrators, so this enhancement allows for failover regardless of MX configuration.

Warm spare redundancy is a technique to ensure service availability in the event of hardware failure. An MX deployed in NAT mode, for example, is typically configured as the network’s default gateway, and may be providing critical services beyond next-generation firewalling such as DHCP, best-in-class intrusion prevention, content filtering, and more. In the rare chance such an MX were to go offline, those services can now be seamlessly transferred to a backup MX.

MX warm spare redundancy can be easily configured by selecting an MX Security Appliance in the Meraki dashboard, and then navigating to Configure > Addressing & VLANs. Under the “Warm spare” section, click to add a warm spare MX.

Adding a warm spare MX for redundancy in the Meraki dashboard.

You will then be prompted to type the serial number (or order number, if you prefer) of the backup MX. That’s it—the redundancy is configured automatically behind the scenes! Since the MX uses the Virtual Router Redundancy Protocol (VRRP) to facilitate high availability, the backup MX can seamlessly take over for a failed primary without causing addressing confusion for other networked devices on the LAN.

Deploy a backup MX as a warm spare by specifying its serial or order number.

Once warm spare redundancy has been configured, you can view the status of the HA pair from the MX’s appliance status page (Monitor > Appliance status). This page will indicate which MX is deployed as the primary, whether the backup MX is online and monitoring the availability of the primary, and whether the backup MX is correctly deployed as a warm spare. 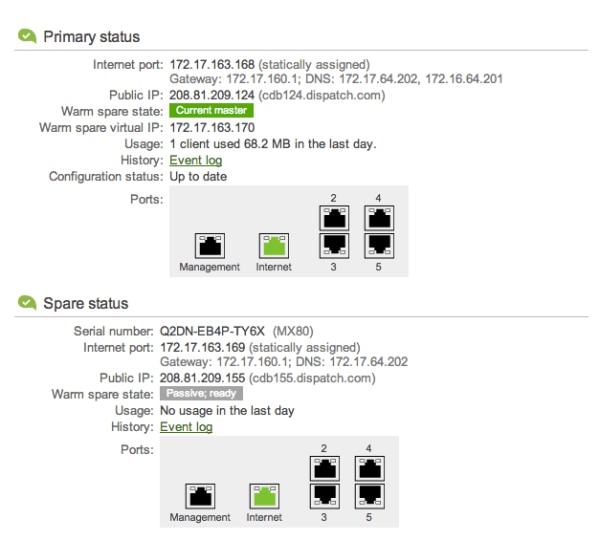 The ability to configure and MX for warm spare failover in NAT mode will be pushed out to current Meraki MX customers this summer as part of our MX feature release. We expect general availability in August, so stay tuned!