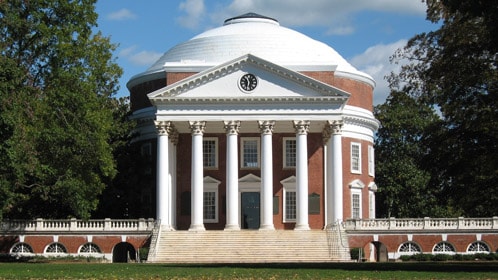 On top of Salt Pond Mountain, deep in the deciduous hardwood forest of the Appalachian Mountains in southwestern Virginia, the Mountain Lake Biological Station is the field research center for the University of Virginia’s Biology Department. Every summer 60-80 researchers, faculty, and students live and work at the station, conducting research in areas such as plant and animal population biology, behavioral ecology, conservation biology, or ecological genetics.

While the fine-scale changes in habitat at this remote mountaintop location make it ideal for studying ecology and evolution, the thick oak tree canopy, frequent rain and fog, windy conditions, and single T1 line into the station make it a wireless networking super-challenge.

“It’s an extremely opaque situation,” said Dr. Eric Nagy, Associate Director of the Mountain Lake Biological Station (MLBS). “We’re trying to set up a wireless network in a forest, but the signal doesn’t go through trees well. We’ve got no line of sight between the points we’re trying to connect, because 20 trees are in the way. And there’s a lot of water, and wireless signals hate water.”

The Mountain Lake Biological Station was built in 1929 and hasn’t changed much since then. It includes two large laboratories and 29 small residential buildings. Ten years ago, the two laboratories were retrofitted with Ethernet cables and switches, and a T1 line connected MLBS to the outside world. Still, researchers could only access the internet from the computer lab, and they weren’t happy about it.

Nagy, who describes himself as “the de facto IT guy” for the minimally-staffed biological station, explained that the MLBS buildings have only two public telephones and no cell phone service, so internet provides the best means for students and researchers from all over the country to talk to their families.

“Not having wireless was a horrible problem,” he said. “Students want to be online all the time, even while they sleep. Everybody’s working hard, taking classes, moving in and out of lab space—and meanwhile people want to be able to sit in their cabins and check their email or do their work. The lack of wireless was a huge constraint to being able to work and be happy at Mountain Lake.”

Nagy wanted to set up a wireless network that would provide coverage to the residential buildings without installing new wired infrastructure. He began by experimenting with strategically-placed small access points from Buffalo Technology, starting with a gateway connection from the wired laboratory and little by little extending the network, but the signal was blocked by trees and closely positioned buildings. “They just weren’t cutting it,” he said.

A colleague from another research field station recommended exploring solutions from Meraki. The range and rugged outdoor specs of the MR58 access points (APs) presented a feasible option for extending WiFi coverage, and Nagy worked with Meraki engineers to develop the optimal configuration. ‘I knew where we needed coverage, and we all looked at the same map and talked on the phone about where the devices might go,’ Nagy said.

He then mounted the MR58s outside on metal fence posts about five feet off the ground—well below the leaf canopy. Most of the APs were powered by Power over Ethernet. “They really are plug-and-play,” Nagy said. “I set them up, exchanged some antennas, and adjusted their position to get the best line of sight through the trees.”

Nagy deployed four triple-radio MR58 APs in conjunction with five Meraki indoor APs, altogether forming a roughly pentagonal-shaped mesh network over 500 feet across, straight through the heart of Jefferson National Forest. “Again, this is such a demanding environment,” he said. “If this were an open area without trees, one MR58 would have done the trick.” Carefully positioned panel directional antennas as well as omnidirectional antennas maximize the communication signal between the repeaters and the gateway unit.

Now nearly all of MLBS’s residential buildings (and even some research plots in the woods) have wireless coverage, and researchers are able to use their laptops to access the internet as well as LAN network resources like printers. At peak summer usage, MLBS residents transferred over 135 GB/month over the network.

“It’s a huge work benefit,” Nagy said. “People can use their own laptops in their cabins instead of trying to use the computer lab, and they are really thrilled.” Nagy noted that the decreased computer lab usage also reduced maintenance work for him.

The remote setting of Mountain Lake Biological Station continues to present unique challenges, but Meraki’s self-healing access points and central management through the Enterprise Cloud Controller effectively minimize Nagy’s headaches. “We’ve only got one power line to the station, and we get a lot of power outages,” he said. “Or, during a serious storm sometimes an AP will lose connectivity, which changes the mesh structure that the signal follows. It’s really demanding on the units, and they’re doing a good job. I’m not there all the time, so the network has to be self-healing to be successful.”

Nagy not only uses the Meraki Dashboard to troubleshoot the network when he’s working from the University of Virginia main campus, he also uses it to monitor client traffic and restrict bandwidth when the station is crowded in the summer. “That kind of control is very useful, to be able to see where the traffic is going and manage that from onsite or offsite,” he said. “Meraki’s remote management and troubleshooting is hugely valuable. Overall, the system is doing everything it promised, and it’s working great.”