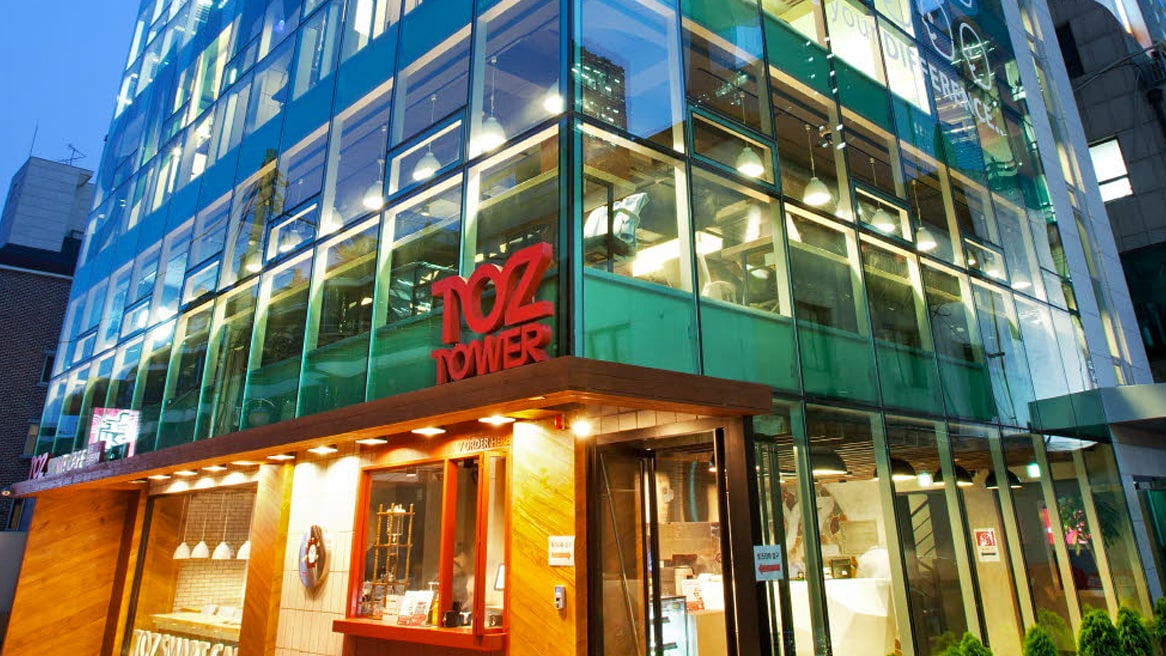 TOZ is the first work-space provider organization in Korea. The company plans, deploys, and operates community gatherings, meetings, study groups, business meetings, educational events, and office space according to customers’ needs. Since TOZ first opened in 2002, it has expanded rapidly. As of December 2016, TOZ was operating 259 centers and serving more than 12 million people.

TOZ aims to be the best co-working space service group by providing a differentiated, multi-purpose space service with new concepts such as MoimCenter, Business Center, Study Center, Smart Work Center and MICS Center. Also, TOZ is planning to expand overseas and become the top space service provider in Asia within the next 5 years.

With the expansion of TOZ’s reach, offering a fast, secure, and stable network that satisfies users has become even more important. A stable, high-performance network is critical for TOZ’s mission, because the physical space as well as the technical infrastructure must be perfectly suited to how the customers use the space.

As the use of mobile devices such as smartphones, tablets, and laptops increases rapidly, businesses must provide high-performance wireless network services to compete in this mobile-first era. In order to proactively respond to customer needs, TOZ implemented its wireless network with the Cisco Meraki network solution.

One major reason TOZ chose Meraki was the increasing popularity of smartphone use in group settings. To meet the needs of its customers, TOZ needed to replace existing equipment with high-performance network services.

Also, due to the rapid growth of TOZ’s business, there was a need to centrally control about 250 business department networks scattered across the nation. The Cisco Meraki solution met both of those needs.

TOZ has deployed the cloud-based Meraki network environment to about 130 centers since it started installing Meraki in October 2016. New Meraki solutions will be deployed in 160 new centers to be opened in 2017.

TOZ conducted a thorough evaluation before deciding which vendor would provide the optimal wireless network environment. The Cisco Meraki solution and several different vendor’s products were each used to build a respective network environment, and were thoroughly tested for 6 weeks. TOZ ultimately chose Cisco Meraki for its exceptional performance in terms of speed, reliability, and ease of management.

It took about 3 months to deploy equipment and review the results of the scenarios. The test was successfully completed and finally the decision was made thanks to Cisco’s active support for Meraki test equipment as well as the deployment company iCent’s support with staff and efforts.

Currently there are 2 Meraki PoE Switches and 4-7 MR Access Points at each of the 130 TOZ centers, with more product families to be deployed in the near future. Meraki MR supports real-time analysis/control of traffic use by user/application, strong wireless security using the separate dedicated radio, RF analysis and auto-tuning/optimization, etc. Furthermore, it can help minimize the time and cost of deployment because it supports all the features in a cloud environment, without adding a separate hardware.

TOZ improved management efficiency after introducing Meraki, which supports handy deployment, management and troubleshooting of its distributed network, by providing a stable network and utilizing its diverse features. Above all, TOZ is pleased with the Meraki solution because all devices can be monitored in real-time from one dashboard.

Meraki allows visibility into the whole network topology and detailed information for troubleshooting, as well as easy tagged network-based settings such as editing configuration information, appointing managers and reporting. Also, it can minimize risks by setting the admin access authority level as appropriate, while maximizing management efficiency by providing a variety of remote diagnostic features such as running cable tests and packet captures.

Thanks to Meraki, TOZ can now check all centers’ real-time status at a glance via the network topology and location heat maps features. The TOZ team can also see how much and what kind of traffic is on the network, and how many people at each center. This visibility makes it possible to respond quickly and accurately to any issues.

Efficient traffic management is possible due to features that allow admins to control network traffic at the individual device levels. Furthermore, with the enterprise mobility management solution, admins can intuitively find a device’s location and set security features. These benefits allow TOZ to efficiently and consistently manage IT assets.