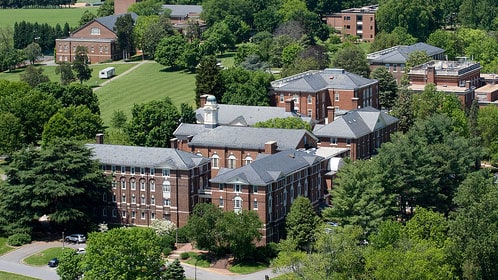 Sweet Briar College is nestled within more than 3,000 acres of rolling hills and meadows in the foothills of Virginia’s Blue Ridge Mountains. Over 600 on-campus students enjoy the benefits of two lakes, six nature sanctuaries and an extensive network of walking, horseback riding and hiking trails. But before the summer of 2009 students were lacking a cohesive wireless infrastructure.

“Our wireless infrastructure was aging rapidly, and our WiFi coverage was spotty at best,” said Aaron Mahler, Director of Network Services at Sweet Briar College. Student residence halls were checkered with students’ rogue WiFi devices – a security concern for the college. In addition, with a sprawling campus and a network conceived from a hodgepodge of WiFi devices, the college’s network was becoming impossible to manage.

Sweet Briar wanted to provide wireless to match every college student’s high expectations. “As far as our students are concerned, having functional WiFi is akin to having electricity and a dial tone – it just needs to be there,” Mahler said. At the same time, he knew he needed a network that was secure, centrally managed, and that could support the heavy demand students placed on the system. “Our students are downloading media, media, and more media. We have to have a fast, healthy, ubiquitous WiFi network. It is crucial to student life and the student experience, and that ultimately affects their happiness which in turn affects enrollment and retention.”

Mahler set himself an ambitious goal: with two staff members and 75 days of summer, find and deploy an affordable, reliable, and manageable wireless networking solution.

“Meraki’s combination of easy management and affordability is what really won us over,” Mahler said. With his original budget, Mahler realized that by deploying Meraki he could nearly double his total number of access points (APs) compared to the next best alternative – allowing him to provide coverage for the entire campus.

With a small IT team, ease of installation was crucial. Over the summer break, Mahler and his associate were able to deploy 130 of Meraki’s plug-and-play, self-configuring APs and upgrade Sweet Briar’s network design to the latest WiFi standard. “We just plugged them in, turned them on and literally walked away,” Mahler said. “Each AP takes care of itself. No per AP configuration needed.” The campus’s two SSIDs – one open to everyone through a splash page, and one requiring Sweet Briar login credentials through 802.1X RADIUS – were equally easy to create and configure with a few mouse-clicks in the Meraki dashboard.

Meraki’s combination of easy management and affordability is what really won us over.Aaron Mahler, Director of Network Services

“It’s a beautiful interface and provides us with a tremendous amount of information,” Mahler said. For example, he can see all the iPads on the network simply by searching for the word “iPad,” and he knows that 20% of his bandwidth is going to NetFlix.

Mahler also appreciates the self-healing mesh capability of the Meraki design. If one AP loses connectivity, it will automatically mesh to the nearest connected AP and continue to carry traffic. “We have had cases when a building was disconnected from our fiber backbone briefly, but the AP in that building connected immediately to APs in a nearby building and continued to seamlessly carry traffic. The students in the dorms were not even aware that it was happening,” he said.