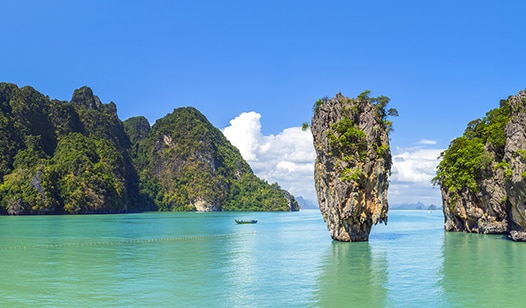 With breathtaking sunsets and clear blue waters, Phuket is one of Asia’s most popular holiday destinations with over 10 million tourists a year. Nestled in southern Thailand, it is home to palm-lined beaches and superb hospitality. Chalermluck Kebsup, the Mayor of Patong City, Phuket, saw a need to improve tourism services, such as enhancing the transportation network and bettering the tourist experience around Phuket. This led the government to pioneer the idea of initiating a smart city project for Phuket. “We want the smart city project to improve the quality of life for locals and tourists, improve emergency services, and provide real-time transport and traffic data,” mentioned Mayor Chalermluck.

The Government of Phuket identified that providing public WiFi was the first step to improving services and amenities for locals and tourists. In partnership with the Thailand Ministry of Communication, Mayor Chalermluck was tasked with providing a reliable and easy to use public WiFi solution.

Tourists and local businesses in Phuket have voiced the need for consistent city WiFi coverage — tourists want WiFi to get around and find the best spots in the city, while local businesses want to increase their online footprint with photos and customer reviews. “There have been multiple companies to offer public WiFi in Phuket, but they have had limited success due to inconsistent coverage and poor user experience,” said Mayor Chalermluck. Based on the poor experience that the government had with these other companies, the government identified the challenges they needed to overcome for success — a solution to tackle high-density areas, continued connectivity, and a seamless user experience. The government wanted a solution with excellent wireless performance, a great user experience for end users, and simplified management for the IT team.

To help install, deploy, and manage the wireless network, Mayor Chalermluck and the Government of Thailand needed a reliable telecommunications provider that was able to execute the public WiFi project. The Government chose CAT Telecom, one of Thailand’s largest networks with a reliable infrastructure that reaches most of the country. Dr. Surapant Meknavin, a Director at CAT Telecom, headed up the team to find the most suitable wireless vendor for Phuket.

Dr. Surapant was introduced to Meraki by their channel partner during the joint participation in the assessment of cloud managed wireless system by the Government of Phuket and CAT Telecom assess cloud managed wireless vendors. Outdoor wireless was chosen to address the requirement, and with the features like high density wireless and seamless connectivity around the city convinced Mayor Chalermluck, Dr.Surapant, and the team to choose the Meraki MR84 for the city-wide deployment.

The Meraki MR84s had the right feature set, including high performance deployment with 802.11ac for open-air coverage, but the web-based dashboard was the major drawcard. “The ability to manage all of these access points from one dashboard will allow for easier management of the network,” said Dr. Surapant.

“There were two main considerations for choosing a wireless solution. One of the considerations was to look for a solution that is easy to deploy, and Meraki fit that requirement,” mentioned Dr. Surapant. “However, the most important factor was whether this solution was able to create a sustainable business model for wireless around Phuket.”

Phuket has limited technology infrastructure, so it was crucial to Dr. Surapant that they chose a wireless solution that was easy to deploy. With Meraki, “the team can complete the configurations via the web-based Meraki dashboard,” said Dr. Surapant. This allowed the CAT Telecom team to simply mount the Meraki wireless access points around the city centre and the beaches, plug them in, and the APs downloaded the configurations automatically from the cloud. “The team can immediately check on the Meraki dashboard to see whether the WiFi is working. This has saved a significant amount of time and cost for the deployment throughout the city,” added Dr. Surapant.

The Government of Thailand instructed and funded CAT Telecom to find, install, deploy, and manage the wireless solution, but “there was only initial budget to install and deploy this wireless solution and minimal budget to maintain the network,” Mayor Chalermluck. Keen to ensure that the city WiFi be a continuing service to the city, Mayor Chalermluck, Dr. Surapant, and the team needed to find a sustainable business model.

“We worked with our partners and they showed us a location-based business model which leverages an advertising model for tourists, powered by Meraki wireless solutions,” explained Dr. Surapant. “With this model, we would offer tourists and locals a seamless login to the free city WiFi and provide location-based and personalised advertisements based on each user’s profile.” To achieve an intuitive and seamless WiFi signup process, Meraki with its channel partner’s solutions, Turnstyle and SpotAnalytics, is able to provide an external captive portal to allow users to roam throughout the city without having to re-authenticate at every access point.

Phuket is able to get deeper visibility into its clients with the analytics provided by the Meraki dashboard. “Features including the built-in heat-map and client analytics on the cloud-based dashboard are perfect for our needs,” noted Mayor Chalermluck.

With this advertising model in place, along with the partnership with global media agencies, CAT Telecom and Phuket have access to advertising to provide tourists and businesses with an enhanced experience, while providing the revenue that is crucial for a sustainable business model to the maintain of the city WiFi project for the future.

To be able to deploy 120 APs across the city and have it working in 5 days is an impressive effort – such an express installation with Meraki.
Dr. Surapant Meknavin

Once the decision was made to deploy Meraki throughout Phuket, Dr. Surapant noted that “it took 3 months of site planning, but the installation happened quickly.” The team deployed and mounted 120 Meraki MR84 APs in less than a week.

Dr. Surapant remembered how quickly everything moved. Just six days after the Meraki APs arrived in Thailand, Phuket had a kick-off event for the Government to announce the Phuket SmartCity WiFi project. “Thankfully, the Government and CAT Telecom had chosen Meraki, a wireless solution that was so fast to deploy,” remarked Mayor Chalermluck.

The team managed to install and deploy 120 Meraki MR84s throughout the city centre and the beach in just five days, in time for the kick-off event. “To be able to deploy 120 APs across the city and have it working in 5 days is an impressive effort – such an express installation with Meraki,” mentioned Dr. Surapant.

Instead of having to send people around the city to update configurations of these access points, the team can easily manage the web-based dashboard from the office. “With Meraki, not much has to be done for network management. There is almost no need to manage because it has very few errors,” said Dr. Surapant.

With Meraki, the Government of Phuket is able to offer better amenities for the city, including free WiFi access for locals, tourists, and businesses alike. “Providing city WiFi has allowed our tourists to explore the best dining and entertainment options around the city. All they need to do is connect to the Meraki SSID we created (‘!@SmartCityFreeWiFibyCAT’) and they can enjoy their holiday while being connected,” said Mayor Chalermluck. “It has also allowed local businesses to tap into online exposure and increase their revenue.”

The analytics provided by Meraki and its partners add insights for the local community and businesses. This has paved the way for local businesses to create loyalty programs, advertising, and incentives for customers, leading to higher retention rates. With a new and improved technology infrastructure that allows for mobility, Phuket is now poised to attract more foreign business and employ more local talent.

The aim for Phuket is to be the first smart city of Thailand, and the potential of the Phuket smart city project is endless. “Wireless with Meraki is the first step towards unlocking this massive project,” added Dr. Surapant.