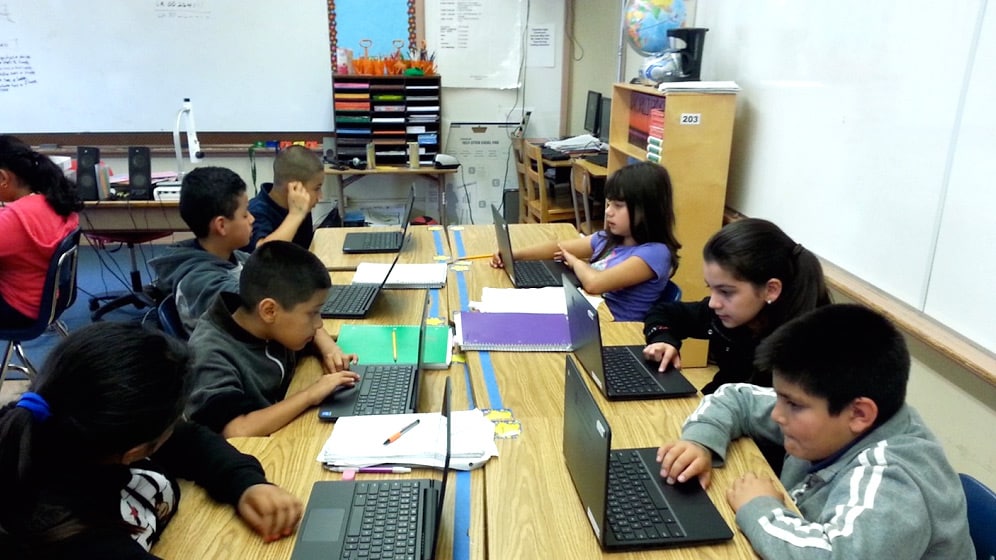 Technology at northern California’s Oakland Unified School District has fundamentally changed over the past few years and is continuing to evolve and meld into every aspect of learning. Moving from a pencil and paper model to an online technology model, which promotes fast-paced education and collaboration, is one of the key motivators spurring schools to rethink how they structure their curriculum.

Oakland USD’s Chief Technology Officer John Krull is well aware of just how quickly changes in technology and education can happen. At Oakland USD, the 2013-2014 school year marked the initial implementation of the new Common Core testing standards, a state-mandated online learning and testing initiative setting standards for mathematics and English. To support this initiative, Krull needed a network that could support hundreds of students simultaneously taking online tests. “I came on board in August 2013 and Common Core testing started in April 2014,” explained Krull. “We needed to move and we needed to make a decision fast.”

Oakland Unified School District provides educational services to over 37,000 students annually and is comprised of more than 120 K-12 schools and child developments centers. When Krull joined the district, he discovered that while the previous network was functional, it was only meant to support the laptop of the occasional roaming teacher. Its intended use was not for classrooms of students using mobile devices for collaboration, and certainly not for supporting hundreds of students accessing online tests all at once.

Krull knew that major technology changes were needed in order to successfully meet the April 2014 go-live date for the first round of online testing.  Before the 2013 upgrade, each site had varying levels of wireless infrastructure, as well as varying quantities and ages of mobile devices. The result was that each site generally lacked both continuity in technology offerings and the ability to support them. “There was inequality across the sites when facing online testing,” Krull explained. “We had 10,000 computers to use for testing, but the computers were all different makes and models. The network had the same problem.” Students and staff had been using an aging computer system to integrate technology into the classroom, but it was not robust enough to meet the new education requirements.

New technology and an upgraded network

Krull had heard about the Meraki cloud-managed solution at a previous job and decided to pilot the Meraki MR34 802.11ac access points. “We started by putting them on the walls at one of the high schools, and it was so successful that we pulled the trigger and got 300 APs,” said Krull. Today, the network has grown to almost 3,500 MR 34s.

With only 5 of 34 IT staff dedicated to network operation, Krull’s mantra of “equitable, supportable, and standardized” is crucial to maintaining daily operations. A recent award in federal funding helped fulfill this philosophy by financing the initial purchase of Meraki APs, as well as 10,000 new Chromebooks. Conforming all school sites to a model of mobile Chromebooks carts with a Meraki AP attached provided the equality and standardization Krull desired. The simplicity and power of the cloud-based management for the APs provided the small network staff with the ability to easily support and manage the wireless. “The whole Meraki dashboard turned into our help desk dashboard. It’s had a huge impact on the network and has shown us weak points that people had been putting up with,” explained Krull.

It’s so easy to use. In a few weeks we added 10,000 devices to the network and 300 Meraki APs, roughly doubling the end user computing devices and significantly adding to the wireless — all without hiring a single extra person. John Krull, Chief Technology Officer

From an end user perspective, the district’s IT team has begun surveying staff, students, and principals about their experiences. The results have been extremely positive and have even been accompanied by pictures of excited students and rich-technology usage in the classroom. “Typically, end users have extremes, they either love or hate wireless,” Krull noted. “The Meraki devices provide the speed and improved user experience. It just works and people are happy.”

Unifying the district under a single network model drastically reduced the amount of time and energy exerted by the IT team on a daily basis. All of the sites are connected in a hub and spoke architecture to a metropolitan WAN which routes all traffic back to a main data center, running alongside a redundant backup. The data center houses district services including storage, servers, firewall, and security. Depending on location size, the network connection comes in to Cisco switches in the MDF which are then connected to smaller IDFs as needed. The district is working towards standardizing on Cisco Catalyst 3k switches at each site, an upgrade the IT team is excited about, given the amount of control they provided. Krull explained that simplification of the network is critical in a district the size of Oakland USD, “and even though Cisco switches can be complex, the integration with Meraki wireless helps make them easy.”

The IT team created the initial AP configuration in the Meraki dashboard and simply installed the Meraki APs on Chromebook carts, where they downloaded their configurations once plugged in. Along with the Meraki 802.11ac AP mounted on each Chromebook cart, the plan is to also place a Meraki AP in every classroom and workspace. APs on carts will be dedicated to testing and intensive online use, complete with their own Chromebook SSID with Meraki DHCP enabled, allowing students to authenticate via 802.1X with Meraki RADIUS. Meanwhile, APs in classrooms will broadcast a different SSID and will be used for daily classroom activity, including research, collaboration, and application usage. “We want to have the high density coverage on Chromebook carts for those that are testing and another set of APs for non-testing, broadcasting a different SSID,” Krull explained. “We want a highly engaging, blended learning environment streaming video, while also testing.”

Upgrading to Meraki wireless has had a massive impact on the network, empowering network engineers and technicians to actively troubleshoot issues, as well as optimize the network space between the WAN and the end user. Before the Meraki deployment, visibility into the network consisted of merely being able to see whether a device was online or not; now network engineers are providing first and second tier help desk techs with read-only access and tools to diagnose many of the network issues. The Cisco Meraki dashboard is also providing insight into Oakland USD’s downstream issues, including lost packets and misconfigured DNS servers. Overall, the end user experience has greatly improved with increased speeds, WAN optimization, and improved security.

“It’s so easy to use,” Krull said. “In a few weeks we added 10,000 devices to the network and 300 Meraki APs, roughly doubling the end user computing devices and significantly adding to the wireless — all without hiring a single extra person,” said Krull.

Shortly after the first round of Common Core testing concluded, California’s state superintendent of public instruction requested a conference with Oakland USD to assess the results of the program. The discussion included a panel of principals, staff, and students and was focused on the effectiveness of the testing standards, ease of use, and overall thoughts. But there were only a few brief minutes spent talking about the wireless. “It was incredible. Here is the person who decided to do online testing in the state and we weren’t talking about bad bandwidth, computers breaking, or slowness,” explained Krull. “Instead we were talking about kids being engaged in the testing. The fact that the network worked flawlessly during testing was an impromptu measure of success.”