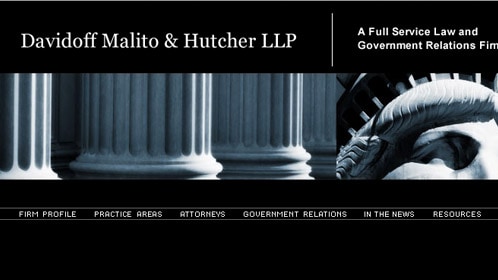 Davidoff Malito & Hutcher LLP is a multidiscipline full-service law firm, providing expertise in government relations as well as traditional legal services. Founded in 1975, Davidoff is head- quartered in Manhattan and has strategic offices in Long Island, Albany, and Washington, D.C. Using the IT consulting services of Kraft Kennedy, Davidoff has deployed a Meraki wireless network to provide guest Internet access as well as secure employee access for roughly 100 full-time employees at the firm.

For 5 years, Davidoff had wanted a wireless network at its offices, but two factors prevented the firm from deploying one: security and cost. From a security perspective, the guest wireless network needed to be completely separate from the employee wireless network. The guest network would provide Internet only access, with no access to internal resources on the local area network (LAN). Furthermore, any viruses or worms on guests’ computers must not be able to reach the secure internal network. In contrast, the employee network would provide connectivity both to the Internet and to resources on the local area network (LAN). In order to separate these two wireless networks, Davidoff faced a costly proposition. Davidoff considered paying for a separate Internet connection that would be dedicated to the guest network, in addition to the existing Internet connection for employees. Moreover, many of the wireless access points on the market could only broadcast a single wireless network, so Davidoff would have to double the number of access points for the same coverage area, simply to offer the guest network and the employee network simultaneously. This design was too complex and costly for Davidoff to accept. But, throughout this time, the need for guest access was only increasing. Davidoff bought time by setting up wired desktop computers in conference rooms for guests, but these desktops still exposed the internal network to security intrusions. Meanwhile, new associates joining the firm from laptop-centric law schools increasingly expected a secure internal wireless network to facilitate tasks a simple as note-taking from a laptop during meetings.

Finally, Rob Cohen from Kraft Kennedy, the IT consulting company for law firms and legal departments, contacted Davidoff. Meg DeGia, Davidoff’s office administrator, recalls the conversation: “Rob called and said, ‘We have the solution to answer all of your concerns.’ That solution was Meraki.” Meraki’s dual-radio access points were deployed in the Manhattan and Long Island offices, and both offices share the same configuration. 2 wireless networks are broadcasted by the access points—a guest network that provides Internet-only access, and an employee network that authenticates users with a WPA2 pre-shared key and provides access to LAN resources. The Davidoff wireless network is managed through Meraki’s web-based management interface by Davidoff’s single on-site IT administrator, Shane Martin. “I thought it was going to be a lot harder to install Meraki,” says Martin. “I just plugged in the access points, went onto the web site, and configured the network. It took only a couple of hours.” Since the Meraki solution is centrally managed, bringing up the In the Long Island office was as simple as plugging in the access point, and letting it load its configuration from the Meraki Cloud Controller. Since there was no on-site IT staff in the Long Island office, installation was done by an attorney. “And if an attorney can install it…” Martin trails off with a smile and a wink.

I thought it was going to be a lot harder to install Meraki, I just plugged in the access points, went onto the web site, and configured the network. It took only a couple of hours. Shane Martin, IT Administrator

Today, over 30 guest users are on the Davidoff guest network at peak each day, and employees are able to securely and reliably connect to the private network. Despite the thick walls in the building, which was constructed in the 1960’s, the Meraki APs have been able to cover the entire floor. One of the biggest unexpected benefits of the wireless network is for the receptionist at Davidoff’s Manhattan office, who did not have any network connectivity prior to the Meraki wireless network. Now, the receptionist can be more productive by being online, performing tasks such as being able to add names for security to allow into the building. “In this economy, we all have multiple roles,” says DeGia. “Wireless has been very valuable because now, we can all accomplish a lot more.”

I thought it was going to be a lot harder to install Meraki, I just plugged in the access points, went onto the web site, and configured the network. It took only a couple of hours.