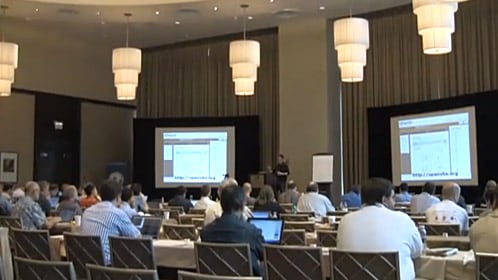 “When the conference is in full swing, there are 25 rows of people stretching across a full ballroom,” observed Tony Minessale, ClueCon’s creator and the founder of FreeSWITCH. “Every one of those people has a laptop, and each of them has another two or three devices hiding in a pocket, connecting and disconnecting at will.” It’s a wireless networking challenge, to say the least.

This year Brian West, ClueCon’s event coordinator, made reliable wireless access a high priority for the show—especially because the conference WiFi had failed the previous three years, taking down the venues’ wired networks at the same time.

“We’ve broken hotel routers, we’ve overloaded servers, we’ve had a hotel’s DHCP server run out of leases, it’s been a little bit of everything,” West said. “We’d waste two or three hours and figure out ten different ways to fix something, and then something else would break in a new way.”

For example, when the venue’s network went down at the first ClueCon event, they brought in a satellite link and ran an Ethernet cable from the roof to a switch in the event room. The cables they had in reserve weren’t long enough, so for two days a ‘floating’ switch held up by two Ethernet cables hung like a clothesline behind the presenter.

West received a recommendation for Meraki’s wireless solution from Dean Drako, CEO of Barracuda Networks, and West decided to go for it. “Meraki looked much better than any of our other choices,” he said.

Meraki expected intense usage from ClueCon’s 200+ highly technical attendees. With that in mind, Meraki planned the wireless deployment at headquarters a week before the event, uploading a floor plan of the 4,480 square foot Trump Ballroom to the online dashboard and configuring the four MR14 dual-radio access points (APs) that would be used. To protect the hotel’s wired network, the APs were rate limited to 500 kbps/250 kbps per user for an expected 15 Mbps pipe, with a maximum ratio of 50 users-to-AP.

Despite this careful preparation, Meraki faced several key challenges when it came time to actually deploy. Meraki Sales Engineer Dan Pittelkow arrived at the Trump Hotel the day before the conference and learned that the conference would have an 8 Mbps backhaul rather than the expected 15 Mbps. This backhaul would also share the same T3 line as the rest of the hotel, an oversight that raised immediate red flags in terms of the event’s bandwidth impact on the Trump’s LAN.

In addition, when Pittelkow attempted to secure the uplink for the conference network, the hotel’s splash page prevented the Meraki APs from connecting to the cloud. Meanwhile, the Meraki event network was competing with the hotel’s free WiFi network in the ballroom. This problem meant attendees could get around the Meraki-imposed 500 kbps/200 kbps rate limits by switching to the Trump network—resulting in a temporary individual increase to a 9.5 Mbps rate limit, but cumulatively causing disaster. With the entire hotel running off a 44 Mbps T3 line, the bandwidth would quickly be used up, making all hotel guests and attendees suffer. “Two people could have joined the network and taken the entire hotel down,” West said.

West and Pittelkow met with the Trump’s IT staff and convinced them to power off all the Trump APs in the ballroom area. Trump also allocated static IP addresses for the Meraki APs, bypassing the hotel splash page. To avoid any further dependency on the hotel’s DHCP server, the Meraki network was configured in NAT mode, meaning each Meraki AP would assign IP addresses to clients out of a private pool.

To maximize coverage, the ClueCon/Meraki setup team propped the four MR14 APs on stands in the corners of the ballroom. They were powered through a simple Netgear 12-port PoE switch under the stage. Pittelkow tested the AP and user rate-limits and enabled channel spreading, with 20 MHz wide channels on the 2.4 GHz band and 40 MHz wide channels on the 5 GHz band. After the APs were brought online, he scanned for rogue APs and let the cloud  automatically reassign the channels. Pittelkow used the Meraki WiFi Stumbler, a freely available web-based site survey tool, to confirm that the APs were each on different 5 GHz channels, and only one 2.4 GHz channel overlapped.

Altogether the physical setup took only one hour, and the ballroom was ready the next morning when the VoIP enthusiasts arrived and connected to the unencrypted Meraki SSID via a conference-related splash page.

Pittelkow used the Meraki Dashboard with live updates to proactively monitor the network and the per-client usage throughout the event. Under the initial rate-limit, the event’s overall load on the hotel’s pipe remained at approximately 6 Mbps. Meanwhile, a number of attendees joked that they had taken down conference networks in the past, and they could surely take down Meraki’s—but they were happily mistaken.

This is the first event I have been to where everyone is online with a laptop and the wireless is working just fine. Huge kudos to you.Darren Schreiber, Cluecon conference attendee

Over the course of the conference, the wireless network saw 246 unique client devices and transferred 34.6 GB down and 8.76 GB up with no downtime. Minessale said he received a lot of positive feedback from delighted attendees who were surprised at the steady connection. “People anticipate being let down,” he said. “Hotels are never prepared for the traffic at these events, so Meraki provides a great solution for a common but important problem.”

Conference attendee Darren Schreiber sent Meraki an unsolicited email echoing Minessale. “I go to about five conferences a year with 100-1000 people at each. The wireless ALWAYS stinks, without ANY exception,” he wrote. “This is the first event I have been to where everyone is online with a laptop and the wireless is working just fine. Huge kudos to you—it helps me stay in touch with work while I’m gone for a week, which is essential to my ability to come to these things.”

This is the first event I have been to where everyone is online with a laptop and the wireless is working just fine. Huge kudos to you.