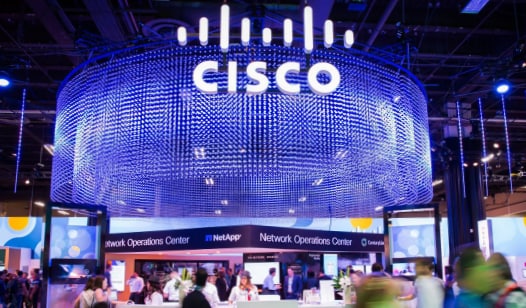 What is Cisco Live? Depends on who you ask.

For the thousands of network administrators who attend the massive conference every year, Cisco Live is the best place to learn about the latest innovations from the world’s largest networking company. For Cisco’s leadership team, it’s a tremendous opportunity to announce partnerships with companies like Apple. And what about for JW McIntire, Program Manager for Cisco Live’s own networking team? “Cisco Live is simultaneously the most exciting and the scariest part of my job,” McIntire says.

Behind the scenes, McIntire is just one of many individuals who worked tirelessly to ensure over 28,000 attendees enjoyed reliable connectivity at Cisco Live! Las Vegas 2017. This team, made up of nearly 50 individuals, included McIntire; Stephen Lynch, a Consulting Systems Engineer at Meraki; and Ryan D’Souza, a Technical Marketing Engineer at Cisco. The challenge they faced was daunting: besides building a robust infrastructure that could deliver and transmit information quickly, the team also had to protect everyone and their devices from network security threats. Plus, it hardly needs to be said that a network meltdown at an event hosted by a networking company would be catastrophic (not to mention deeply ironic).

As one would expect, Cisco’s own networking equipment, such as its industry-leading Catalyst switches and ASA FirePower security appliances, have played a critical role in supporting networks at Cisco Live for years. Following Cisco’s acquisition of Meraki a few years prior, Meraki has also helped support the network access layer at Cisco Live events. But it was in 2017 when Meraki truly made its mark at Cisco Live, making its debut in the high-pressure Cisco NOC (Network Operations Center) at the center of the Cisco Campus. “Deploying Meraki equipment at Cisco Live wasn’t about showing off our latest and greatest gear,” Lynch said. “What we really wanted to do was prove that Meraki was ready for an incredibly demanding enterprise environment, so we incorporated Meraki right into the backbone of the network.”

The Meraki deployment at Cisco Live focused on a few main areas: satellite registration kiosks, the Cisco Campus, and the Cisco Store. A combination of Meraki switches, security cameras, access points, and security appliances was deployed throughout Cisco Live to create a first-class attendee experience.

Though the actual conference was hosted at the Mandalay Bay hotel, Cisco set registration kiosks up at Luxor and The Cosmopolitan to speed up the registration process for attendees staying at those hotels. Powering each of these kiosks were Meraki MR52 access points, MS220 switches, and an MX64 security appliance. Using Auto VPN, a feature of the MX that automatically provisions a site-to-site VPN connection without tedious configuration, registration info from the kiosks could be securely sent to the central registration server. “We’ve actually had a similar setup for the satellite registration booths at past Cisco Live events,” Lynch said. “The success we had in 2015 and 2016, at Cisco Live Cancun, really paved the way for a broader deployment of Meraki gear in 2017.”

That broader deployment was most evident at the Cisco Campus, the heart and soul of the entire event. For 2017, the Cisco Campus was divided into two separate sections: the World of Solutions and the IoT and Industry District. A pair of stacked Meraki MS425 switches served as the aggregation switch for the main Cisco Campus area; these switches were linked via two 40GB OSPF connections to an upstream Cisco 7000 Series core switch. Connected to the stacked MS425s were a dozen MS350 switches, which in turn were linked to 110 MS220 switches distributed throughout the Cisco Campus to facilitate connectivity of numerous access points and Ethernet-connected devices.

Additionally, McIntire and his team created a new logical network for the IoT and Industry District that consisted of five Meraki access points and 32 MS220 switches. These APs and switches were all connected to a high capacity MS350 switch, which was then connected to an MX100 security appliance that tunneled all traffic to an MX400 located at the Cisco Live NOC.

Meraki also played an integral role in creating a top-notch experience at the DevNet Zone, where developers inside and outside Cisco could network, and at the Cisco Store. Both were located in the World of Solutions area of the Cisco Campus. Meraki MR wireless access points, with integrated Bluetooth Low Energy (BLE) radios, tracked foot traffic in the DevNet zone using attendees’ devices and corroborated this data with the locations of key Cisco experts, who were tracked via BLE-enabled Cisco badges. This allowed the visitors to the DevNet Zone to locate the right expert in real time on a 3D map of the event space. Additionally, Meraki MV security cameras protected the Cisco Store from theft and supplied the footage for a giant video wall displayed live to attendees.

While Cisco could have deployed all of its traditionally managed equipment at Cisco Live, the real value of Meraki — and the reason why Cisco acquired Meraki in the first place — was the simplicity that Meraki brought to the table. “At Cisco Live, what’s truly remarkable is the sheer size and scale of the event,” McIntire commented. “Cisco equipment managed on-premises wouldn’t have been nearly as easy to stage and deploy. When you’re talking about such a massive deployment, the time that Meraki saved us was valuable.”

In the weeks leading up to Cisco Live, a team of Cisco engineers (including D’Souza, the Technical Marketing Engineer) acquired all of the Meraki equipment and staged it in Building 17 at Cisco headquarters in San Jose, CA. The Meraki dashboard made it quite simple to configure devices in bulk. “Once we had all the switches online [in the staging environment], I upgraded 130 switches in a couple of clicks, labeled them based on location, and created the VLANs. Normally, you’d have to upgrade the firmware on each switch one by one or use some other software management tool, which would have been a huge pain,” D’Souza said.

After everything was configured according to plan in San Jose, the team shipped the Meraki equipment to Las Vegas. From there, it was simply a plug-and-play affair, since the devices retained their configurations locally. The team setting up all the equipment in Las Vegas — including Meraki Sales Engineers Alex Burger, Nathan Wiens, and Jeffry Handal — could use troubleshooting tools right from the dashboard to ensure that all the cables were transferring data correctly. They could even blink LED lights on individual switches to indicate what needed to be plugged into each port. Finally, monitoring tools within the dashboard helped make sure packets were passing through the network correctly both during setup and throughout the event.

Ultimately, McIntire, Lynch, and D’Souza were pretty hands-off during Cisco Live and could concentrate on learning and networking during the conference, a testament to how easy Meraki equipment is to manage. “I came out there post-deployment and was basically an escalation point, in case we ran into any issues,” Lynch said. “Fortunately, there wasn’t a single reported problem with any of the Meraki gear for the duration of the event. Alex, Nathan, Jeffry, and the rest of the team ensured that everything went seamlessly.”

Lynch is also proud of how well Meraki performed in such a high pressure environment; 8.6 TB of bandwidth passed through the Cisco Campus network. “It was a real hybrid environment — we had tons of Meraki equipment alongside Cisco gear and hardware, including Cisco video surveillance cameras,” McIntire said. “When cloud management made sense, going with Meraki was a no-brainer because it eliminated the need for physical controllers as well as NVRs [Network Video Recorders] for the cameras.”

Meraki technology helped Cisco achieve success in Las Vegas, but Lynch recognized the value Meraki can bring to enterprises everywhere. “Many of the reasons we saw so much success with Meraki at Cisco Live — like simplicity, high density, and zero-touch deployment — matter in so many different environments,” Lynch said. “Based on the positive feedback we got at Cisco Live in 2017, I’m confident Meraki will continue to play an important role at future Cisco Live events going forward.”