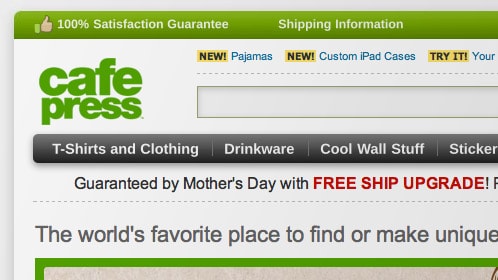 Steve Shead had a problem. As the IT leader at CafePress, he needed a robust wireless solution to keep his company’s rapidly growing engineering, marketing, administrative and production staff reliably connected. CafePress is the world’s biggest destination for self-expression through merchandise and the leader in user generated commerce.

Launched in 1999, CafePress has empowered users to create, buy and sell customized merchandise online using the company’s print-on-demand and e-commerce services. Today, CafePress is a growing community of over 6.5 million members who celebrate merchandise that reflects their interests, passions, beliefs and affiliations.

The wireless solution Shead inherited had a bad habit of dropping connections when staff moved between floors in the corporate offices. He was spending a lot of time fielding complaints, sniffing out failed access points and getting the APs back online. It was costing him in more ways than one. “Peoples’ connections just kept dropping off,” said Shead.

He needed coverage for over 100 employees in an office building with a unique layout, as well as a 150,000 square-foot production facility. But his options seemed limited at best. Making things more difficult, CafePress is a multiple-OS office, and was Steve was challenged with integrating his non-Windows users onto any network powerful enough to meet demands.

It was time for a change. Shead began researching options. After a test-drive of another vendor’s solution, he was more frustrated than ever. “I thought anything would be better than what we have. But what we ended up with was too complex for us; it’s me and a few other people managing IT, so we can’t waste time. It took us 4 weeks to realize they sold us something we just couldn’t use.”

So Shead developed an ROI business case for several available solutions. “I thought to myself, how many APs do I need for maximum coverage, but with minimum spending?” he said. When he presented the various case scenarios, the company chose Meraki.

“The thinking was that, if this is as easy as they say it is, let’s just do it.” So Shead ordered some Meraki access points and took them for a spin. “It was plug, play, configure, and you’re done. Wasn’t that an eye-opener?” Shead said. “The team came in, plugged them in, configured them, and they were gone. They weren’t even here for an hour.”

What appealed most to CafePress was the simplicity of the deployment, and also the ease with which Shead could manage the network from anywhere using the Meraki Dashboard. “What struck me all the way through the deployment was how you just plug in a Meraki AP, then it joins the network, all on its own. It doesn’t get any simpler than that,” he said.

Security was also a concern for Shead, who like many IT leaders needs to protect sensitive and proprietary information, but also needs to provide flexible access to people in many different environments. Initially, Steve was concerned about tunneling through his firewall to access Meraki’s cloud —but his concern didn’t last long. “The security SSL is the same as what we were already using for external APIs, for example. I’ve already tunneled out for them, its part of our security policy to do so. So what’s not to trust? At first I was concerned that the security was off-site. I talked myself into that corner and right back out again.”

Shead is employing multiple SSIDs to create one network for the corporate employees and a public one for guests, partners and vendors. He is considering using additional SSID’s for VoIP or security cameras in the future. Knowing Meraki is VoIP capable helped him make his decision.

[Meraki] performs much better that our previous solution from a major known vendor, plus I’ve got the cost savings on both ends. Meraki is infinitely cheaper, quicker, and more robust.Steve Shead, Director of IT & Information Security Officer

The network Shead built is working even better than he expected. “You can roam from my office, into the elevator, and around upstairs and never lose your signal,” he says. “That’s great, because we have a lot of engineers, and they like to roam.” If Shead ever sees a blip in coverage he just plugs in another Meraki access point to boost the signal.

When considering a wireless solution, Shead used his personal methodology. “There are really two points of cost,” he says. “One is the physical dollar cost. But there is also total cost of ownership, including system administration and reliability. Meraki performs much better that our previous solution from a major known vendor, plus I’ve got the cost savings on both ends. Meraki is infinitely cheaper, quicker, and more robust.”

Finally, there is also the refreshing fact that Meraki acts as a partner to Shead, helping him maximize his network’s capabilities. “I’ve been impressed with the technology, but also with our interaction with the company and the engineers all along the way.”

Meraki performs much better that our previous solution from a major known vendor, plus I’ve got the cost savings on both ends. Meraki is infinitely cheaper, quicker, and more robust.