Every quarter, the Cisco Meraki product marketing team presents a comprehensive review of new product introductions and improvements released over the previous three months. By keeping customers informed on a regular basis about what’s new at Meraki, we hope to help them make the most of their Meraki deployments.

While the Meraki Quarterly consistently enjoys excellent attendance, we’re cognizant of the fact that many IT admins find it difficult to find the time to watch an hour-long webinar. For those who haven’t found the time to watch the full webinar, here’s a quick recap of some of the material we went over earlier this month.

1. Improvements to Maps and floor plans

Meraki network admins have long enjoyed viewing their MR access points on floor plans in the Meraki dashboard. This helps in optimizing indoor and outdoor wireless coverage and figuring out where to place new access points.

Now, admins can map MS switches and MV cameras in addition to their access points. We think this is an exciting development for MV in particular, since mapping cameras can help admins ensure that important areas receive the surveillance coverage they need. Read more about the newest member of your floor plans.

2. An update on MX LTE deployments

Back in August 2018, Meraki introduced a slew of new MX security and Z-Series teleworker appliances, with a few new models that come with integrated LTE. By baking LTE right into the product instead of forcing admins to attach a separate cellular dongle, we hoped to give IT admins a new level of visibility into their connections and the ability to leverage a new set of APIs to make these MX models a new platform to build new capabilities on top of. Just five months later, we’re pleased to report that organizations worldwide have embraced this vision.

In the webinar, we briefly discussed how a few Meraki customers have taken unique advantage of our MX models with built-in LTE. Here are a couple of examples:

Watch the webinar for additional ideas of ways your organization can leverage the power of MX + LTE.

Finally, we highlighted a new Customer Success Training program available for customers who purchase at least 200 SM licenses. This training gives customers the opportunity to engage one-on-one with a Systems Manager expert for assistance with deploying and configuring SM across different devices.

Meraki MV smart cameras took a major leap forward last November with the launch of two new hardware models, extensible analytics capabilities, and a new cloud archive option. Since then, the MV team has hardly rested on its laurels, continuing to work hard to bring new improvements to the experience of managing cameras in the Meraki dashboard.

In addition to the aforementioned ability to place MVs on maps and floor plans, admins can now use up to 12x digital zoom to get a close look at live and historical footage and set up rotating video walls to monitor multiple scenes from one place. Additionally, admins can gain access to more detailed analytics with configurable zones. As an example, a large department store could organize multiple MVs scattered throughout the men’s area under a single “Men’s Zone” and use the MV’s people counting capabilities to see how many people navigate through the men’s area in a certain timespan, whether they’re looking at men’s pants, shirts, or shoes.

Finally, during the webinar, we took a deep dive at MV Sense, a set of integrations that let admins build interesting business solutions that leverage the data collected by MV cameras. To provide a bit of inspiration, we highlighted a few fun use cases that Meraki has built involving Nerf guns, a piano, and a light that changes color based on how many people are detected in the frame!

5. A deeper look at APIs

Did you know that one out of every five Meraki customers is using APIs? We’re incredibly pleased with the uptake of our API offerings. During the quarterly webinar, we walked through a whole host of new features and enhancements recently made to the Meraki dashboard API. For example, webhook alerts now let you subscribe to cloud-based alerts in any receiving service, and admins can use templates to configure many different syslog servers at once.

Visit apps.meraki.io for turnkey solutions developed by Meraki and third-party developers. To learn how to create your own solutions using APIs to build on the Meraki platform, visit create.meraki.io.

The full recording of the January 2019 Meraki Quarterly contains tons more detail, and we encourage you to watch it if possible. If you weren’t able to make it this time around, no worries — we’ll be back in April with another quarterly.

Want to sound off on something we covered? Head to the Meraki Community and let us know your thoughts!

You are probably aware of the increasing use of cloud-hosted applications, as well as the worldwide availability of reliable LTE coverage. You’ve almost certainly witnessed the increasing use of mobile devices, growth of video traffic, and increasing security threats. These trends challenge modern organizations to adapt to a complex landscape with higher bandwidth requirements, multiple uplinks, and threats that can take down networks. Despite these complexities, IT admins can use new technologies to position their branch networks for a successful future.

Today, we are excited to announce brand new additions to our MX and Z products, with multiple new MX security & SD-WAN appliances, along with a new Z-Series teleworker and IoT device. With upgraded and improved hardware, the additions to the MX line feature higher throughputs, faster Wi-Fi, and integrated LTE modems. The built-in modems will offer a greatly simplified way to connect remote locations or provide failover redundancy via LTE.

The new MX products benefit from state of the art new hardware features designed to deal with an evolving branch environment:

The MX family adds six new models to the highly successful MX64 and MX65 small branch security & SD-WAN appliances. The new MX67 and MX68 products include models with wired, wireless, cellular, and PoE+ capabilities.  Both the MX67C and MX68CW feature region-specific SKUs to accommodate separate cellular bands. Meraki is partnering with mobile providers to fully certify the cellular platforms across all regions. For more details of MX67, MX67W, MX68, MX68W, and the cellular MX67C, MX68CW visit the MX datasheet.

We are also delighted to add a new model to our feature-packed Z-Series teleworker gateway family with the Meraki Z3C, now with LTE. A built-in 100 Mbps CAT 3 LTE modem in the Z3C provides an elegant way to add redundancy for teleworker deployments. Our customers are also excited about using the Z3C to securely connect remote or isolated machinery such as vending machines, ATMs, and kiosks.

LTE in the dashboard

Similar to the rest of Meraki’s products, these new cellular MX and Z-Series models offer exceptional visibility via the Meraki dashboard. For these models, IT admins can monitor current traffic and historical performance, as well as the ability to troubleshoot and configure their LTE connections. For example, the dashboard allows users to configure and reset their cellular connection with a few clicks of a button. There will be a new LTE API, and the dashboard will make it simple to manage devices at scale using templates. 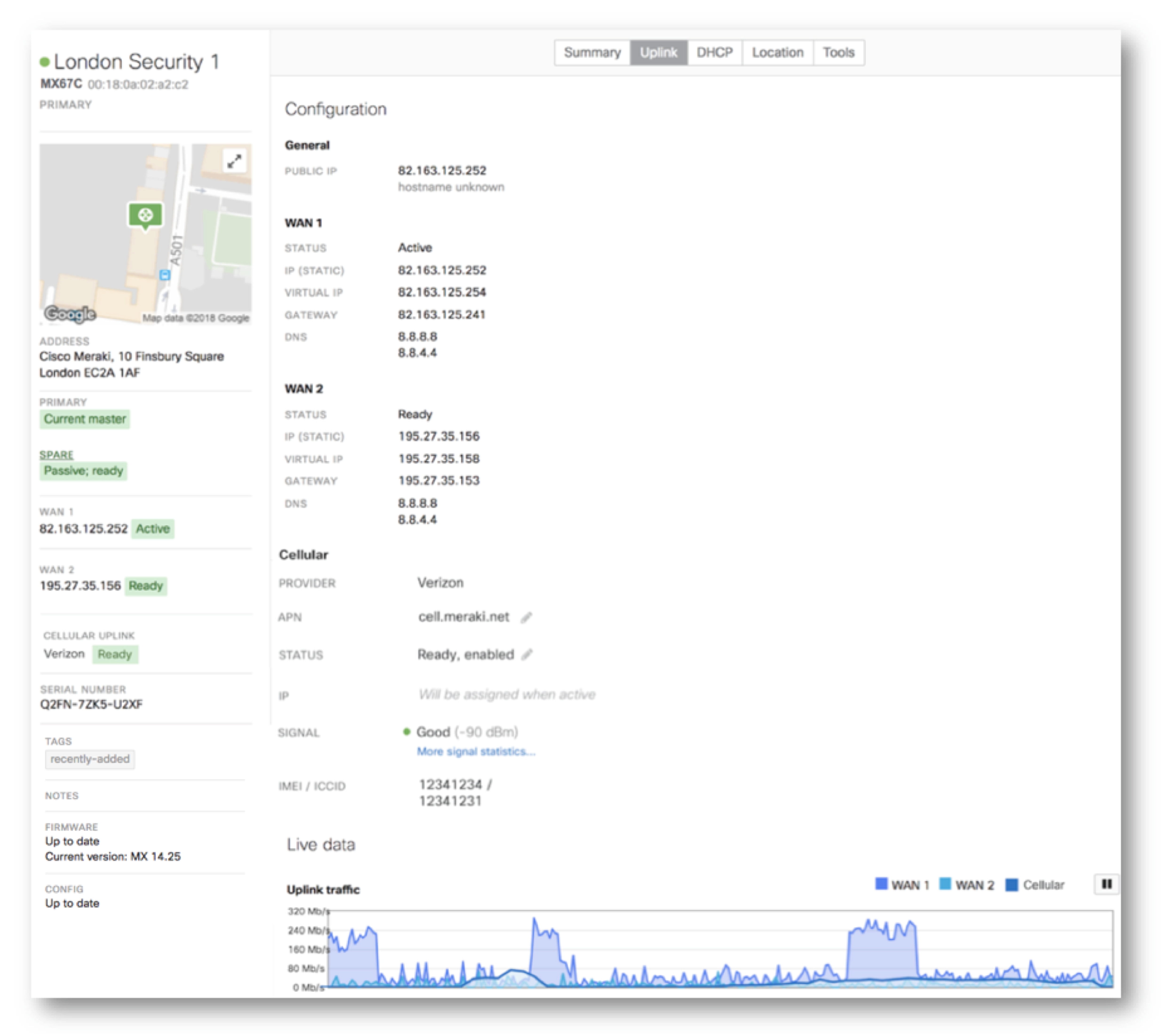 The Meraki MX continues to march forward in its mission to provide market-leading threat intelligence and an intuitive SD-WAN offering to keep customers connected and secure. Try out the new devices for yourself with a free trial, and let us know what you think.

Speaking of free trials, for those purchasing the new MX and Z-Series models in the next three months, we have an additional treat: a free 45-day trial of Meraki Insight, our intuitive tool for monitoring and troubleshooting WAN and application performance. With Insight, IT admins can monitor the status of all uplinks in the organization, and troubleshoot any network outages within seconds. It also provides detailed performance metrics to understand the root cause of ISP outages. Contact a Meraki sales representative for more information.

To learn more about the MX67 and MX68 models, as well as the Z3C, watch the launch webinar or visit the What’s New page.