Imagine you are a network engineer responsible for supporting an office with 100 people, all of whom use Office 365. One afternoon, all of a sudden, you start to hear persistent complaints from your colleagues that the internet is slow. They can’t load their emails, Word docs, or Excel spreadsheets.

It’s hard to know where to begin. Is the issue due to a faulty wireless AP? Have you lost your internet connectivity? Is a user hogging all the available bandwidth by streaming Netflix? Is Microsoft experiencing a server outage? Or is it all of the above? How do you start troubleshooting? Running packet captures is one option, but it will take a lot of time, which is the one commodity you do not have, since everyone in the office is affected. Lost productivity equals lost money. 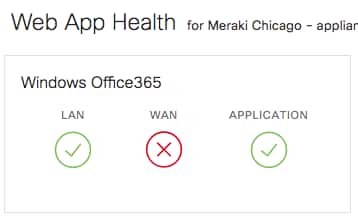 This hypothetical scenario became very real a couple of weeks ago in the Cisco Meraki Chicago office. During the afternoon of July 3, a few staff members started observing that Office 365 experience had noticeably deteriorated.

A quick look at Office 365 on the Meraki Insight dashboard suggested that there was a WAN problem affecting O365 traffic. 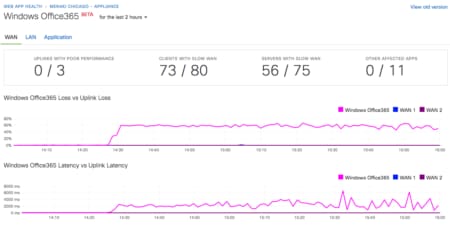 Closer inspection revealed that the internet connection was fine (i.e. no loss on WAN1 or WAN2), but starting at around 2:30pm, Office365 traffic on the WAN specifically was significantly degraded (~60-80% loss with >3s latency). So much so that almost every user in the office was affected.

Interestingly enough, only our Chicago office was affected where incidentally all traffic is routed through San Jose. This indicated that the root cause was localized to the network path between the Chicago office and the Office365 server local to San Jose it was trying to reach. Thus, in the short term, one workaround could be for a user to VPN into another Meraki location, so that the user’s Office 365 traffic flowed to a different Microsoft server and bypassed the local WAN problems.

Armed with this information from Meraki Insight, our IT team was able to proactively issue guidance to staff at the Chicago office: “Hi Folks, we suspect there’s a WAN outage near an Office 365 server in the San Jose area that is affecting us due to our network traffic being routed to San Jose. I will send an update once I receive more information regarding the outage, however some people have seen success by using VPN to connect to Outlook.” 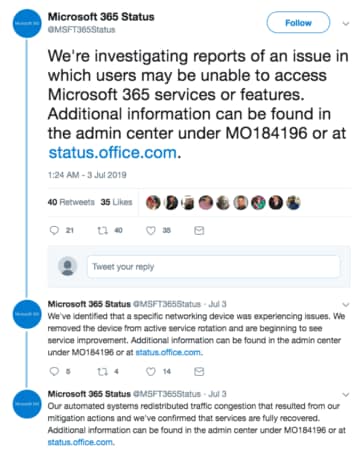 Office 365 adoption is skyrocketing around the world. Yet, despite this increased adoption, IT admins do not have an easy way to know how or where to start troubleshooting. Without Meraki Insight an IT admin would need to painstakingly test each potential contributing factor one-by-one. This takes time, and since the network conditions keep changing, it becomes impossible to say with certainty which factor or factors is actually causing the problem. Meraki Insight reveals how much each factor is contributing to the problem whilst keeping network conditions constant.

Our customers can spend hours trying to identify the root cause of events like these. Meraki Insight can answer such questions in a matter of minutes, saving them a huge amount of time and money. Learn more and try out Meraki Insight for free here.