The growing prevalence of digital technology is rapidly transforming our lives for the better. Just think back over the innovations that have come along since the Internet took off in the 1990s. It’s hard to imagine what life was like before our modern-day conveniences came along: smartphones, online maps, on-demand services… the list goes on.

The advent of cloud technology has significantly enhanced the services we use, making our data available everywhere, and helping applications learn how to serve us better. Every smartphone user knows that the more information they’re prepared to share with their apps, the more useful those apps can become.

The flip side of welcoming all this technology into our lives is the growing body of information about us held on servers belonging to the companies we choose to communicate with. The depth of this information runs a wide gamut from simple web browsing data captured in a website cookie, to highly accurate and detailed location records gathered by apps on our mobile devices.

Overwhelmingly, this data collection is benign in nature, designed to enable tools — often free — that make our lives easier, incentivized by new business opportunities for a more targeted approach to marketing and advertising. Some users consider this a fair exchange while others are less comfortable. For all kinds of reasons, some individuals have strongly protested against data related to them being held by companies, particularly those offering social networking.

In Europe, specifically those countries who are members of the European Union, concerns over data held by third parties and how that data may be used have ultimately led to the General Data Protection Regulation (GDPR). This detailed document constitutes a comprehensive approach to data protection and sets out new mandatory requirements for organizations established in the EU, or that offer goods or services to people located in the EU, giving people present in the EU control over data that’s collected about them.

Like many cloud-based technology companies, Cisco Meraki uses a limited set of data to enable use of our services by our customers. For example, we’re able to monitor the use of different applications by end users, which helps IT admins configure their networks to work efficiently, and to plan for growth. Meraki access points collect anonymized data about the location of devices seen on the network in order to assist network or retail store planners with optimizing their environments. In every case, the goal is a better experience for both Meraki customers, as well as their own customers.

Starting today, May 25th 2018, Cisco Meraki is introducing tools that respect the spirit and intent of the GDPR, ensuring that for everyone affected by this regulation — both our customers and our customers’ customers — control over data is simplified, Meraki style. Please visit the new dedicated page we’ve created to learn more about the changes we’re introducing in connection with the GDPR. We’re listening on the Meraki Community: the perfect place to discuss this or any other topic relating to our work.

Using Wireless Health, an IT administrator can immediately see whether users are (or aren’t) able to successfully access the wireless network and can easily identify problematic access points, clients, and failing connection stages that are causing a poor end user experience. 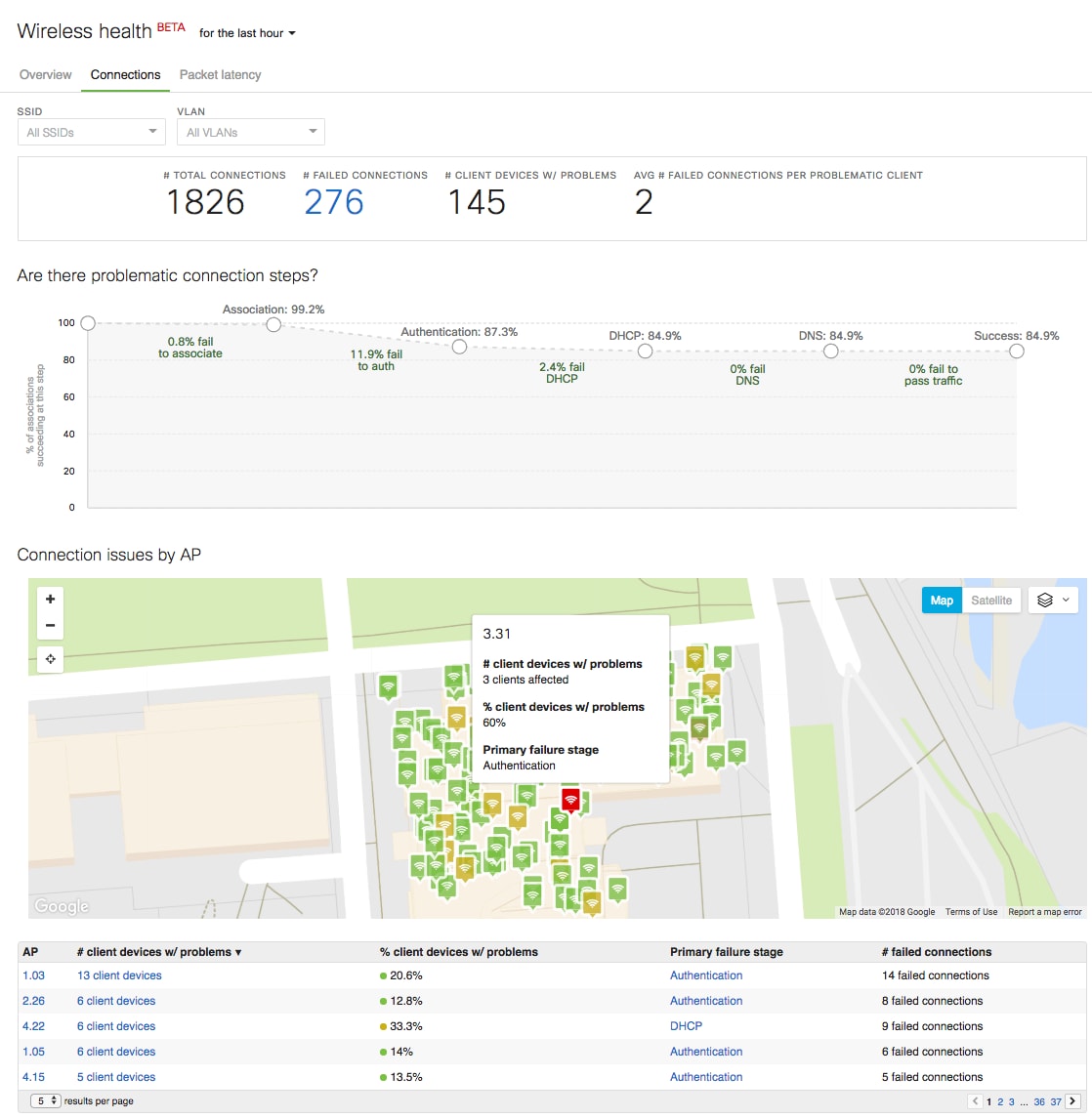 Network-wide failures across each stage of client connectivity can be viewed, allowing rapid root cause identification of poor network performance.

This visibility across all access points (APs) in a given network is critical for rapidly identifying and fixing problems, and successful issue resolution means a successful end user experience. As more organizations look to their wireless infrastructure to glean insights and deliver differentiating services, they can ill afford lengthy, inopportune downtime or latency.

It’s within this context that we’re thrilled to announce that Meraki Wireless Health is now available to all of our MR customers — at no additional cost or charge — as a generally available beta feature. To access Wireless Health, simply navigate to Wireless > Wireless health in the Meraki dashboard. 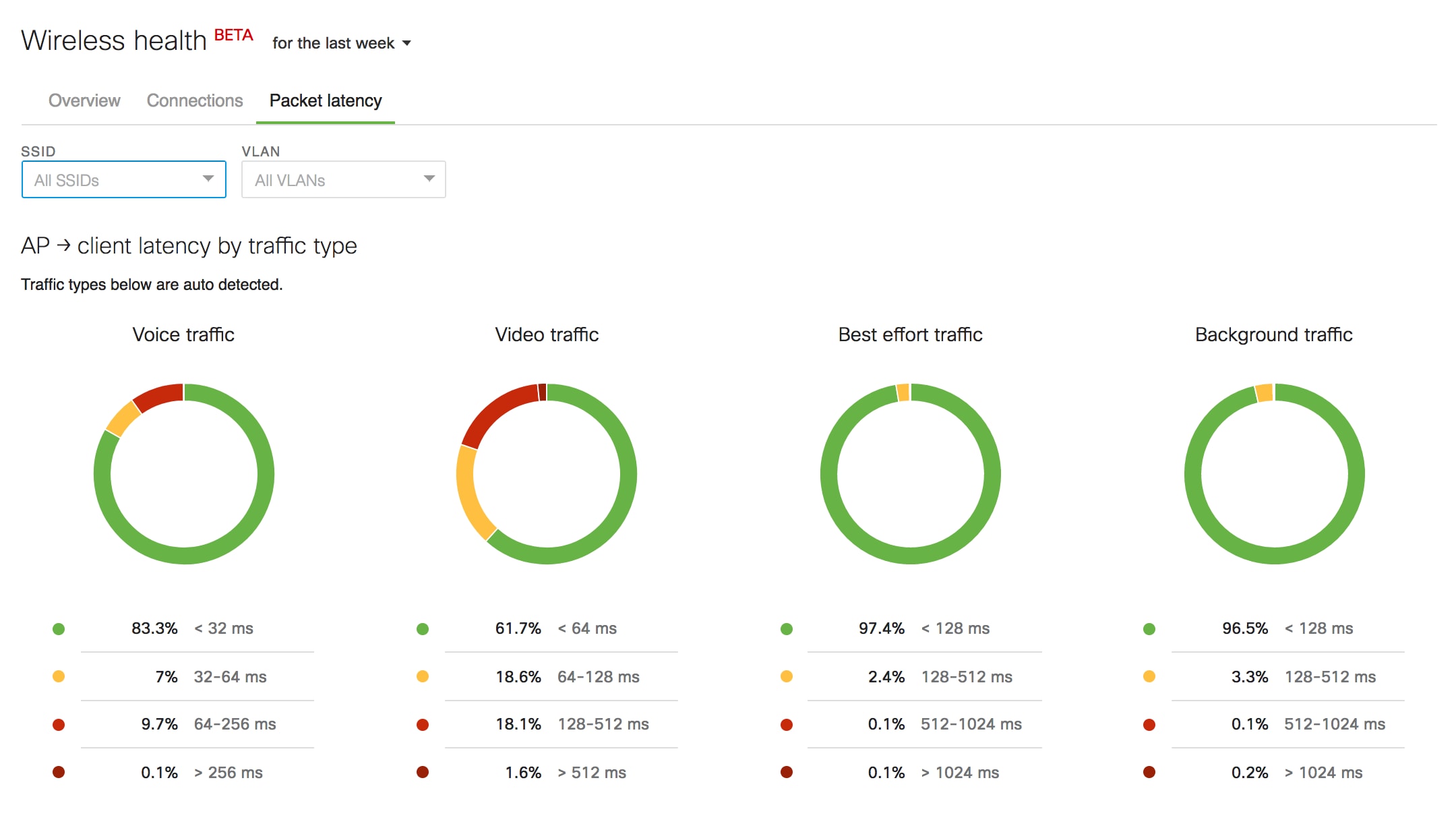 We’d also encourage you to take a quick peek at our live demo video for how to use this new feature or dive deep with our Wireless Health whitepaper.

As this is still a beta feature, we are especially keen to hear from you, our customers, on what additional functionality you’d like to see built into this tool, what’s working for you and what’s not, and what your overall experience has been like. If you use Wireless Health to solve a problem, we’d love to hear your story — we love hearing from you! 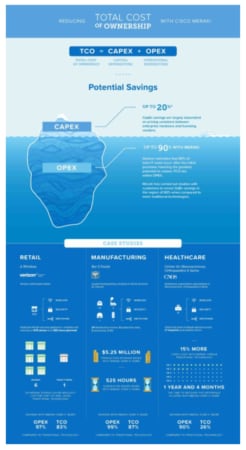 When Denis Guerrero joined Moreland School District as the Director of Technology, he knew it was time to find a better way to manage the school district’s 1,400 iPads. Throughout the district many iPads were locked, unusable, associated with different Apple IDs, and loaded with apps purchased through various gift cards, personal accounts, and vouchers. Managing this fleet of devices was becoming an impossible task and it was time to set some processes and tools in place for district-wide iPad visibility, app distribution, and device management.

After investigating different options, Denis and the team chose Cisco Meraki Systems Manager to accomplish these goals. To take full advantage of Systems Manager, the team worked to unify the district under one Device Enrollment Program (DEP) account with Apple, consolidate app license purchases, and register with Apple School Manager.

Systems Manager allows schools to easily provision Apple devices (out of the box) through DEP, install apps, apply custom configurations, and limit classroom distractions such as games and web surfing. Furthermore, schools and organizations can leverage Meraki’s free trial program for expert assistance throughout the trial process, access the open Community forum for peer insight and advice on the solution, and reference video and instructional content to help them get oriented in the dashboard.

Today students and teachers at Moreland School District can easily log into iPads, find the right apps, and start their digital lessons — without wasting instruction time on iPad lockouts or mitigating student access to distracting website and apps.

In an upcoming webinar on May 16th, 2018, Denis will share his favorite features and how Systems Manager helped his team streamline student learning throughout the district. Register now to learn more!

Imagine managing your school’s security cameras from an intuitive, web-based dashboard with no NVR, no software downloads, and secure remote access to video footage from anywhere. Sound too good to be true?

Cisco Meraki MV security cameras are changing the way schools think about video surveillance. With Meraki MV, schools can keep students safer by proactively helping with threat detection and security and IT teams can make informed decisions with integrated analytics, which require no servers. MV is easy to deploy and manage, and specifically built with lean IT teams in mind. Here are five reasons why you should consider Meraki MV security cameras for your school or campus’ next deployment:

Schools across the world are deploying Meraki MV to simplify security camera management and keep their students safer. At Reading School District, CR Hiestand and his team use the Motion Search tool to isolate incidents and find what they are looking for in under 20 minutes, rather than searching through hours of video footage. Plus, security guards, principals and school administrators can view footage from a tablet or PC, without having to go to the video monitoring room. At Sweet Briar College, Aaron Mahler has indoor and outdoor MV security cameras deployed across the campus to keep students safe, while providing network admins with an easy to manage solution through an intuitive web-based interface they can access from anywhere.

From May 9th until October 27th, 2018, Meraki is offering exclusive pricing for MV security cameras for education in the United States. Just contact your Meraki sales rep to get started!

To learn more about Meraki MV for education, watch the webinar recording.

You are currently browsing the Cisco Meraki Blog blog archives for May, 2018.