Becoming a “smart city” is something that towns, cities, states, and even countries are striving to achieve. But what does it actually mean to become a smart city? Where do you start? How do those initiatives benefit your community?

To find out, I spoke with Stephen Dawe, CTO at The City of Opelika, Alabama. Stephen is on a journey to make Opelika a digital city, and he takes a systematic and thoughtful approach in deciding which projects to take on and which ones to leave on the sidelines. The conversation highlighted three steps that state and local government IT teams can take today to launch their own smart city projects:

Step 1: Determine if the Project Supports Your City’s Mission

It is easy to get wrapped up in wanting to implement the latest shiny and flashy technologies. But will those technologies support the goals of your community? To get buy-in from the mayor, governor, or city manager, and to see the most success, focus on projects that will help you deliver on your city’s mission. Citizen demand can also be a good starting point: if citizens are asking for it, and it supports your city’s mission, the technology is worth exploring. Make a list of your top five projects, and move on to the next step!

The City of Opelika’s mission focuses on three things: to improve the quality of life for citizens, provide jobs through economic development, and be good stewards of citywide resources through sustainability. Stephen will only evaluate smart city projects that support one of these three areas, making his smart city strategies much more tailored to the city’s needs.

Let’s say you want to implement sensors in every street to monitor and reroute cars because traffic is problematic in your community. But what if half of your streets are windy mountain roads, making it challenging to run end-to-end cabling? Does it still make sense to deploy sensors as well as a network to support them? When evaluating smart city projects, remember that the goal is to deliver outcomes that will deliver on your city’s mission, not necessarily to have the technology everywhere. Select the technologies that will be feasible to implement and will drive the biggest impact.

Stephen wants to work towards closing the digital divide in Opelika. But when he realized that covering the entire city with public Wi-Fi would be extremely difficult due to vast forested areas throughout the city, he determined this was not technically feasible. Instead, he is focused on rolling out public Wi-Fi in underserved areas, public libraries, and all government-owned buildings and areas, so that people can access the Internet when and where they need it. This will not only help bridge the digital divide, but will deliver on the city’s mission to improve quality of life and provide more economic opportunities for residents.

Step 3: Don’t Do it Alone: Find the Right Partners

When exploring smart city projects, it is easy to quickly become overwhelmed. Even after narrowing down the projects you want to work on, and determining their technical feasibility, how do you actually get started? Find the right community and technology partners to help you on your journey; it is impossible to do it all alone. From your prioritized list, start thinking about who you can tap to help you plan out and execute your projects, from local universities to technology partners.

Stephen identified a handful of partners to work with to plan and launch his smart city initiatives. The short list includes various Cisco solutions, including Meraki, CIMCON lighting, and Auburn University, in addition to his collaboration with the Mayor and Government office heads. Each of these partners plays an important role in delivering on his smart city goals. 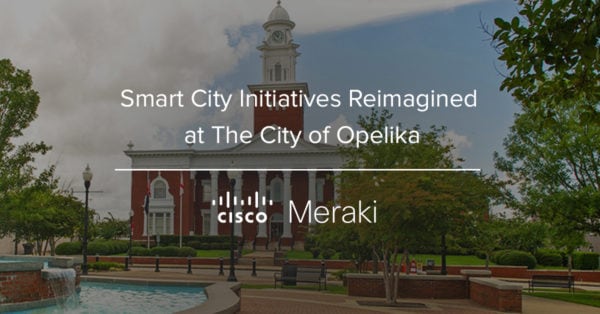 Now that you have a framework, what are you waiting for? Start planning and strategizing your smart city projects today. Still feeling a bit overwhelmed? Listen to this webinar recording to hear Stephen explain firsthand which smart city projects he chose to start with, how he plans to develop and install the technologies, and how he thinks the projects will benefit city residents. Or, attend an upcoming webinar to see a live demo of the Meraki dashboard in action and get your questions answered.