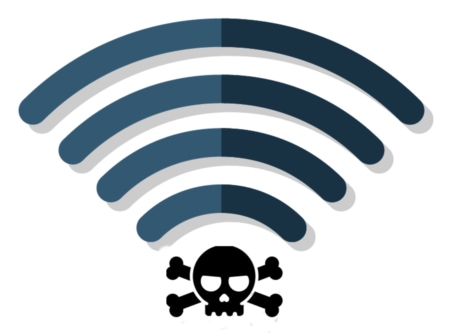 This is the second in a series of blog posts that focus on wireless security and technology at Cisco Meraki.

Wireless LANs are widely critical to the way companies work and are used to transact sensitive data (e.g. point of sale).  A Wireless Intrusion Prevention System (WIPS), such as Cisco Meraki Air Marshal, gives companies the ability to ensure they are protected against threats to these WLANs.  This blog post shows how Air Marshal protects against one such threat, namely a rogue access point.

A rogue access point is an AP that is connected to a company’s physical network infrastructure but is not under that company’s administrative control. This could arise if an employee or student naively brought in a home WiFi-enabled router and connected it to the company’s infrastructure to provide wireless network access. This act introduces multiple threat vectors to the company, such as:

This is by no means an extensive list of threat vectors introduced by this potentially innocuous action. So, it’s very clear that rogue access points are something we need to protect our business critical WLAN and networks from!

Cisco Meraki defines a rogue access point as an AP that is both “seen” on the LAN and is broadcasting SSIDs that are visible to the APs that make up the corporate wireless infrastructure.

In order to identify a rogue AP, all currently available Meraki access points leverage their dedicated “listening” radio to continuously monitor the RF. However, older APs without a dedicated listening radio can also be configured to utilize their access radios at specific times to scan for rogue access points, as shown below:

Air Marshal listens for 802.11 beacon frames sent out by APs that are “visible” to the corporate APs, then all the BSSIDs (advertising MAC address of the SSID) that the access point sees are categorized as either “Rogue SSID” or “Other SSID”.

With this information in hand, we can safely say that this access point is connected to the same wired infrastructure as the Meraki access points and that it is actively advertising at least one SSID. So, we can assume that this is a threat to the corporate infrastructure that needs to be mitigated!

Note: If you have wireless APs that advertise SSIDs and form part of your legitimate corporate infrastructure, then you can prevent Air Marshal from containing them by whitelisting them:

How can Air Marshal protect against rogue access points?

In order to protect your corporate infrastructure from rogue access points, Air Marshal uses a technique called “containment”.  When a Meraki AP is containing a rogue SSID, it uses three frame types: 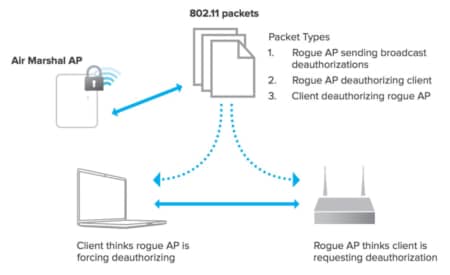 This behavior is shown in the below packet capture:

Note: As containment renders any standard 802.11 network completely ineffective, extreme caution should be taken to ensure that containment is not being performed on legitimate networks nearby. This action should only be taken as a last resort. Please also see the Cisco guidance note on de-authentication technology for more information.

The Meraki Air Marshal system is a best-in-class WIPS solution that includes real-time detection, remediation, and alerting capabilities (please see the references section for more information on the elements we haven’t discussed). This also includes the ability to define pre-emptive policies that will take action to contain rogue APs using the containment mechanisms discussed above.