Total cost of ownership (TCO) isn’t a complicated concept. Simply put, it’s the sum of the upfront cost of a product or service and the direct and indirect costs incurred during its lifetime.

It’s likely to be how most of us consider a large purchase in our personal lives. Let’s say you’re in the market for a new car. You’ve narrowed your selection down to a few potential vehicles that meet your needs. Naturally, within the potential cars there will be a range of prices. To make a final decision, the discerning buyer might go on to compare running costs for the vehicles: how much are they likely to depreciate, how much do they cost to insure, service, refuel, etc. Intuitively, total cost of ownership has been considered.

Nevertheless, many buyers considering an IT infrastructure upgrade can fall into a pattern of using upfront cost as their key criteria. Not only does this inadvertently neglect potential products or solutions that may be much better suited, but in the long run may actually end up costing a lot more.

For most organizations there are usually multiple stakeholders involved in the IT purchasing process with the number increasing with company size. Our first touch point with customers tends to be with the IT folks. Testing out Meraki first-hand, we’re always amazed at how quickly they fall in love with the technology. Naturally the IT folks are convinced, but the next step in the buying process is typically around gaining buy-in from the various other functions in the internal buying chain. The stakeholders in this stage are frequently non-technical and have their own KPIs to satisfy. At this point we’re often asked by customers and partners alike for stats or numbers to quantify how much Meraki customers are saving in operational costs.

We set about acquiring this information and interviewed existing Meraki customers across various verticals to quantify how much time and money they’re saving compared to more traditional technologies. The results are now in:

CHECK OUT THE INFOGRAPHIC 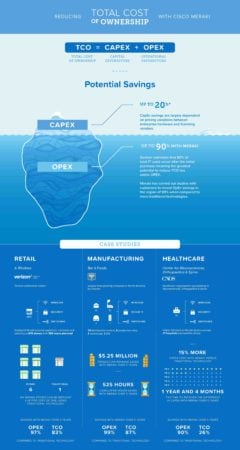 Highlights from the infographic:

The moral of the story here could be likened to the age-old adage “don’t judge a book by its cover.” The true value of Meraki technology cannot simply be judged by its upfront cost. Try out Meraki for yourself and use the TCO infographic to help quantify to non-IT stakeholders in your organization the value of Meraki.