At Cisco Meraki, our fundamental goal is to bring simplicity to IT management. It has always been important to us that we extend that simplicity to the firmware management process, so over the years we’ve tried to strike the right balance of automation and control so that our customers know that their devices are always up to date with the latest bug fixes, security patches, and features. While our approach has worked well for many of our customers and partners, it has also created challenges for some who felt they would benefit from a greater degree of visibility and flexibility when it comes to firmware. Today we are excited to announce some significant advances in the  firmware management capabilities of the Cisco Meraki dashboard. These new tools and processes add deeper visibility and empower administrators to be more self-sufficient when it comes to our firmware without sacrificing our consistent, reliable update model.

These new capabilities come in the form of an update to the Firmware Upgrades page in the Cisco Meraki dashboard. The new page starts users out on the Overview tab, which includes a variety of information: a list of recent upgrades within the dashboard organization, a list of any currently scheduled upgrades that are pending, and a list of the current approved stable versions of code for each hardware product line in our portfolio. This list of stable firmware versions is one of three major changes represented by this new tool, as it includes not only firmware version numbers but also detailed patch notes for each version. The second major change is that any upgrade performed in the last 14 days can be rolled back directly from the recent upgrades list, which will return the network and its devices to the firmware version that was in place before the upgrade. This allows administrators to react faster and more freely to any issues encountered after a new firmware is applied – even if those issues are with other devices in the deployment. 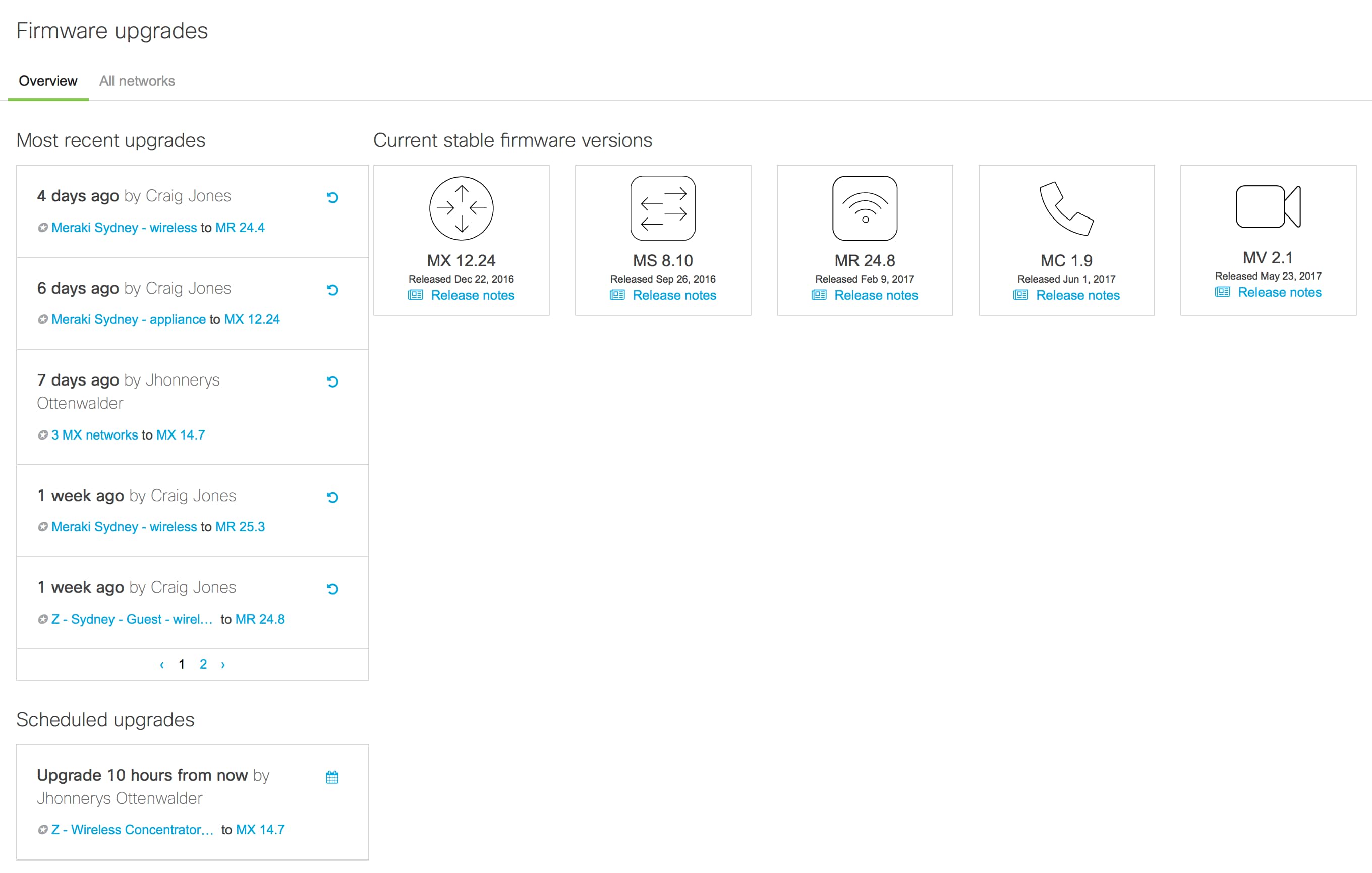 Clicking over to the “All networks” tab presents administrators with a searchable list of all dashboard networks in the organization and their firmware status. Based on the current status of each network, certain upgrade options will be available to put networks on the latest stable firmware, a release candidate firmware (which is a version that is currently undergoing final testing before becoming the new stable version), or the latest beta. The statuses a network can have are as follows:

This represents the third and final major change included in this new tool: administrators can now upgrade to beta firmware themselves, without the need to contact Cisco Meraki Support or their Sales representative. This makes it easier for customers to access new features and bug fixes as quickly as possible. In addition, when upgrading a network to a new firmware version administrators will be able to view patch notes not only for the new firmware, but any versions in between the current and upgrade firmwares, to get a clear picture of exactly what is changing in the code. To perform an upgrade, simply select one or more networks from the list and click the “Bulk upgrade” button at the top right of the page.
These new capabilities are a big step forward in firmware visibility and control for our customers, and we hope they will make it easier for all Meraki users worldwide to get access to new features, resolve issues, and keep their networks secure. This new page will be available today for all Cisco Meraki dashboard organizations via the Organization>Firmware upgrades menu option, so take a look for yourself and, as always, let us know what you think!