Every two weeks, a group of women software engineers at Meraki meets for an hour to dive deep into an engineering skill, code base, or technology. The intent of the group is to build skill digging into unfamiliar source code and documentation and to share expertise across our technical stack. 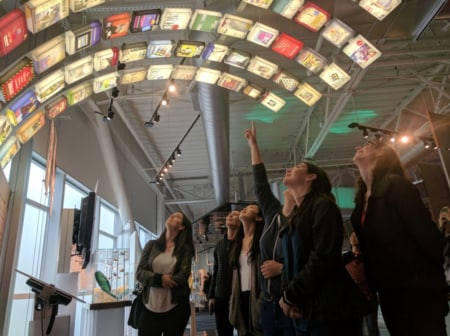 Meraki engineering emphasizes working on the entire technical stack. We give our engineers the opportunity to work in a broad range of technical areas from writing low-level code in the firmware that runs on our devices, to writing code in React, a web development framework, and everything in between. This breadth of engineering disciplines allows Meraki engineers to learn a wide range of skills and technologies. In our study group, we share and build cross-team expertise in an all-women engineering environment, a rare opportunity!

Last week, the study group took a break from our regular routine of reading documentation for operating system commands, implementations of the `String` data type, or the web’s specifications for the structure of website code, to take a field trip to the Computer History Museum in Mountain View.

On a sunny Friday afternoon, we piled into a van outside Meraki’s Mission Bay office and made the trip down to the South Bay. We were all excited to spend time together off-site and explore the museum. 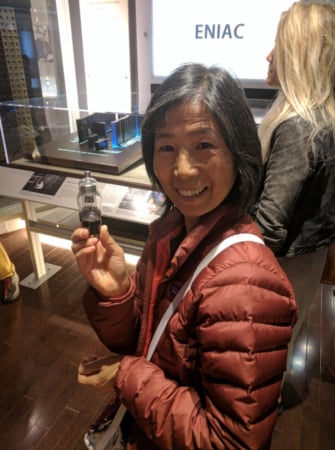 Jenny holding a vacuum tube from an early
computer.

Our visit began with a tour that covered highlights from the history of women in computing. The guide took us all the way from ancient abacuses to Ada, Countess of Lovelace’s, contributions to mechanical computers to Grace Hopper’s invention of the compiler. We were inspired by the stories of our female predecessors’ contributions to our field. 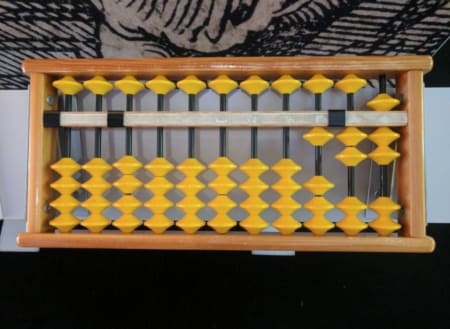 An ancient computing tool, the abacus. 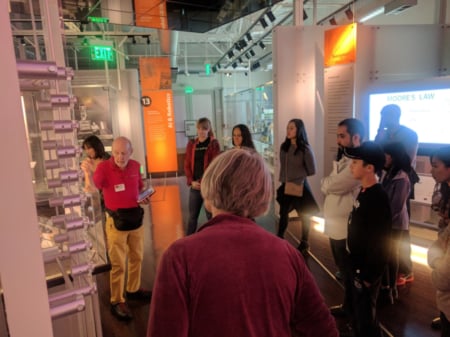 Hearing about the exponential growth of the number of
transistors per square inch on integrated circuits.

After the tour, we explored the rest of the museum. We immediately found the Networking exhibit which featured some of Cisco’s history and even included one of Cisco’s first-ever routers! 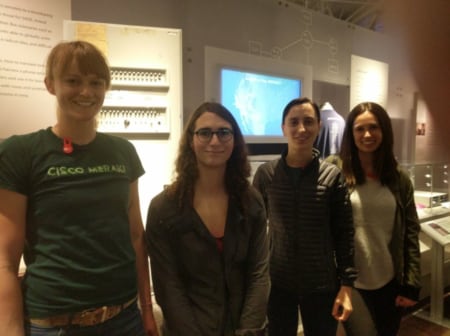 Here we are, Cisco Meraki engineers with the first Cisco router!

All of us had a great time exploring the museum and learning some history of women in computing. After being reminded of the limited opportunities available to women in computing historically, we feel especially grateful to be part of a company that places a high value on gender equality.

Meraki is hiring! Check out our openings in San Francisco, London, and Sydney at meraki.com/jobs.

Lots of teams are making use of new collaboration tools and services in place of email to help increase productivity and transparency. Of course these tools also make it far easier to share our favorite GIFs, a feature paramount to a productive work day. In this post we’d like to share a quick and easy method for integrating Meraki network alerts with your collaboration tool to help everyone stay on top of events. In this example, we will be using Cisco Spark, although the method is also possible with other popular services such as Slack.

Popular services include Zapier and IFTTT. For this example we will be using Zapier. Create a new account, or sign in if you have an existing one.

Automation rules consist of a trigger and at least one action. In Zapier, these are called Zaps. We’re going to use the Zapier “Email” trigger, which provides you with a custom email address that you can begin sending new email alerts to. Once you have selected Email as the trigger, choose New inbound email and create a new custom email address:

Once you have created a new email trigger, you should have a new mail-to email address provided in the step above. You will now want to go to dashboard.meraki.com and configure your Meraki network alerts (Network wide > Alerts & administration). Be sure to add the newly created trigger email address under other email addresses, and configure which alerts you would like to receive. Meraki offers a variety of alerts for each of our products. In this example, I have enabled alerts for any switch port that goes down.

Zapier fully supports Cisco Spark, along with several other communication platforms. When prompted to Choose your Action app, search for your app by name, and select it. You will now be prompted to connect and authorize access. Once you have granted Zapier access, you can now create an action.

Choose the option to Post a message. You can now choose to create a new channel (room) in Spark, or just post to an existing one. In this example we are using an already-created channel named “Meraki-alerts”. Once you have selected the desired channel (room ID), you can now specify the text you would like to be sent whenever a new alert is produced. You will likely want to include the object Body plain as this will ensure the full contents of the network alert are sent. Now for the fun part – go ahead and test the action to ensure a new test message gets posted successfully:

Select finish and rejoice – your team will now immediately be notified of any network events that you have enabled!

There are lots of possibilities with automation engines. Some in our developer community have even created a bot that lets you generate new networks or make configuration changes to an existing network via message instructions. Give it a try and let us know what you think!

The latest ‘dot 3’ release with Apple iOS 10.3 brought quite the buzz again. With Systems Manager, Cisco Meraki’s EMM, we are excited to continue to support iOS releases day one and take another opportunity to talk about what’s new. Below is a breakdown of some of the more interesting 10.3 features now available.

More WiFi control is a popular topic and request from administrators spanning many industries. Whether mobile devices are in a retail shop, an educational institution, a government facility, or somewhere else, it can be crucial to ensure they are joining the right wireless network. Not only can joining the wrong network affect security, especially when open and other compromising networks are in proximity, but this can remove critical access to network resources which devices sometimes need. Systems Manager and iOS 10.3 now bring you the ability to whitelist only the managed SSIDs a device is allowed to join. This ensures the right access for mobile devices wherever that device may be.

Next up is support for additional managed restrictions. With the previous dot 3 release, iOS 9.3, there was a huge emphasis on education and classroom support. Continued technological advancements in the classroom are helpful not just for IT management but to aid teachers in directing and guiding students. Alongside iOS 9.3 we added the ability to share iPads as well as have teachers show student devices on AirPlay enabled screens. Now with iOS 10.3, there is the ability to automatically grant observation permission to teachers using the Classroom app. Other managed restrictions include disallowing or allowing Bluetooth modification, dictation, remote screen observation, and the modification of diagnostic submissions.

On the email security front, Apple is also adding OAuth 2.0 support for the native mail app. When using Microsoft Exchange services with Office 365, this brings token based security that goes well beyond simple username and password. Paired with improvements around S/MIME, which uses certificates for signing and encrypting email, there is now a compelling native solution for secure email which creates a better and familiar experience for mobile users.

Finally we have tvOS, which requires almost no introduction. This brings some of the features found in iOS, which are already loved across millions of mobile devices managed globally, and will expand it to Apple TVs. This includes the ability to restart devices, deploy network configurations, and more. EMM controls on tvOS mean more endpoints simply and effectively managed in the Cisco Meraki cloud. New controls are available in tvOS 10.2 and later.

Systems Manager legacy customers interested in these powerful features can find out how to take advantage of them here.
Start an instant 30-day trial here.

Administrators can now set custom schedules, and rest assured that callers will be directed based on when they are calling.

Let’s take Tony’s Auto Dealership as an example. During the day, Tony wants his customers to be able to call the dealership and learn about business hours, hear the deals of the month, or reach the service team. However, Tony knows that customers calling in at night are likely to need emergency assistance. To accomplish this, he sets up his Meraki Communications IVR to route to his normal message during work hours, and to route to an ‘office closed’ IVR with an emergency service line at night.

MC users can now set up any of these rules with just a couple clicks, all in the dashboard. Build schedules based on specific business needs, and empower callers to find the answers they’re looking for, as quickly as possible.

For more information, get in touch with your Meraki rep or check out a webinar to learn more.

Back in November we announced that the Meraki Dashboard would be getting some international flavor in the form of French, German, Japanese, and Spanish language options. That first foray into offering our interface in languages other than English was a huge step for us and for many of our customers all over the world, and we’re excited to announce that we’ve made further progress in making our dashboard accessible to a broader range of IT administrators with two new languages: Korean and Simplified Chinese.

These new options are available via the Preferred Language selector on the user profile page in the dashboard. 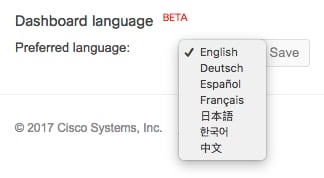 These certainly aren’t the last languages we’ll be adding, so stay tuned for future updates!

You are currently browsing the Cisco Meraki Blog blog archives for April, 2017.