When Stephen Stanton, VP of IT at A Wireless, was told about upcoming plans to acquire 370 stores across the United States, he didn’t think it would be possible. Stanton knew the company would not be able to scale at that rate with their legacy networking solution. But that was four years ago. Today, A Wireless, a full-service Authorized Verizon Retailer, has about 1,170 stores across 46 states—an almost tenfold increase in store locations.

On Thursday, February 9th at 10 AM PT, Stanton will join us in a live conversation to share how A Wireless evaluated and decided on Cisco Meraki as their solution of choice for national expansion.

As A Wireless acquired new stores, they also acquired a mix of IT networking solutions and vendor products. They found themselves with a network built on varying technologies, configurations, and management systems. Implementing a standardized network and centralized management was essential for their continued success.

Over a 3-year period, A Wireless have saved in excess of 80% in the total cost of ownership of the network, compared to a more traditional networking solution. 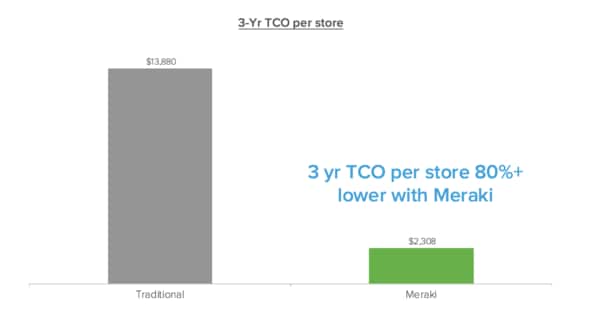 Over 670 stores already fitted with a full suite of Meraki solutions, including MX Security Appliances, MR Access Points, MS Switches, and even a few MC Phones. Now, Stanton and his team are ready to deploy the next 500 locations with the same products and by the final deployment, all 1,170 stores will be full Meraki shops without any other network vendor solutions.

View a recording of this webinar, A Wireless, A Verizon Premium Retailer: Scaling Nationally with Meraki, here: [Link]