Since the inception of the MX product line, one message has come through loud and clear from our customers and partners: they love the MX for branch deployments. From the original MX50 to the MX60 and the more recent (and very well received) addition of the MX64, we’ve continued to invest in new branch MX models and features. This week, we take a huge step forward in the evolution of cloud-managed branch security with the release of the new MX65 and MX65W security appliances.

The first thing anyone will probably notice about the MX65 is the significant increase in port count. The new models host a whopping 12 Gigabit Ethernet ports, more than twice as many as the MX64. This removes the need for an additional switch in locations where there are only a handful of devices requiring network connectivity, helping to keep the cost and complexity of the deployment to a minimum. Fitting these ports onto the back of the device has resulted in a couple of minor design changes, such as the reset button and USB port being on the side of the unit rather than the back. Best of all, thanks to some phenomenal design work by our hardware team, we’ve accomplished all of this without significantly increasing the size of the unit – it’s the same height and depth as the MX64, and less than an inch wider.

Even more important than the number of ports is how we’ve allocated those ports. While eight of them are standard LAN ports like those found on other MX models, the other four have something special to offer. First we have two dedicated WAN ports, so that administrators can connect two Internet or MPLS connections without sacrificing one of the LAN ports. This not only makes the unit simpler to deploy, it also means that the MX65 is a perfect fit for customers who want to make use of our IWAN features to get full use out of their redundant connections.

The last two ports offer the most striking difference in functionality between the MX65 and previous models. As indicated by the lightning bolt icons to the left of the port numbers, these ports provide Power over Ethernet (PoE). Each port operates on the 802.3at standard, also known as PoE+, and provides up to 30 watts of power to any connected PoE-capable device. These can include phones, cameras, wireless access points, or a variety of other devices. As with the increased port count, this change makes it much easier to deploy the MX65 without the need for additional hardware such as switches or PoE injectors, resulting in a cleaner branch architecture and an easier deployment. 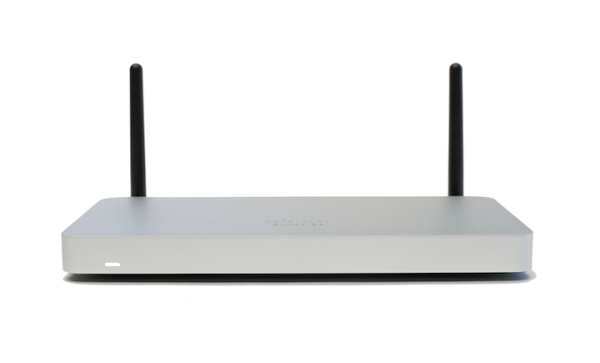 Last but not least, the MX65W boasts not only a new and improved revision of the MX64W’s 802.11ac wireless chipset, but also a custom antenna design that provides both better range and improved wireless performance. For sites that need wireless coverage that goes beyond what a single unit can offer, you can of course still deploy an MX65 with any of our MR Access Points – and with the new PoE capabilities, you can power up to two APs from the MX65 itself.

To learn more about the MX65 and MX65W and how they fit in with the rest of the MX portfolio, check out the Cisco Meraki website.