Ask anybody about their experience of publicly available WiFi of the kind they typically experience in hotels, restaurants and at events, and the response is fairly consistent. It’s not good enough.

There are many potential explanations for this. After all, this is WiFi – a shared, half duplex technology using the air as the transport medium. Like any radio technology, WiFi is subject to performance–sapping interference and signal attenuation from a myriad sources. Walls, windows, water coolers, people, the list goes on.

Getting WiFi right requires thorough planning, particularly the all-important site survey, which will help identify appropriate channels, channel widths, power levels and AP/client density. Appropriate planning only grows in importance as the number of connected WiFi devices continues to increase, from smartphones and tablets to newer ‘things’, like remote controlled cameras and thermostats. Until more radio spectrum is available, increasing congestion is inevitable, eating into the impressive throughput potential of newer WiFi standards like 802.11ac. In case you missed the memo, Meraki APs now have a very useful site survey mode to assist.

Once a quality job has been completed on planning and deployments, most of the remaining causes of reduced performance are beyond the control of the network admin. But there is one simple thing every WiFi admin can do to improve things…. migrate users, and as many as possible, to the far less congested 5GHz band.

It’s simple, the more people, devices and competing technologies trying to squeeze through a single shared pipe, the worse the experience will be for all. The unlicensed 2.4GHz spectrum is that pipe, leading to many referring to this as the ‘junk band’ for WiFi.

Reasons to proactively shift to 5GHz are many:

The typical channel width used in the 2.4GHz spectrum allows for only 3 non-overlapping channels, meaning that in order to avoid interference, APs must be spaced apart with alternating channels. Lower frequencies have greater signal propagation, particularly in open spaces (like concert venues or sports stadiums), so adequate spacing without interference will be more difficult to achieve. In the 5GHz space, there are as many as 24 non-overlapping channels, depending on local regulations and channel width. A well designed network of APs operating in the 5GHz band is far less likely to experience interference from neighboring APs for this reason.

The latest 802.11ac wireless standard, which operates exclusively in the 5GHz band, uses an improved modulation technique which increases throughput for a given pipe (channel) compared to earlier standards. There is also the option to increase the width of the channels (currently up to 80MHz) to increase throughput. This will reduce the number of non-overlapping channels, although in a regular indoor environment the shorter signal propagation of 5GHz signals will mitigate co-channel interference from neighboring APs.

There are certainly still devices supporting only the 2.4GHz WiFi standards (802.11b, g and n). Printers and barcode scanners are common culprits here. However the good news is that the majority of new laptops, smartphones and tablets now contain chipsets capable of either 802.11n or ac. In other words, it’s time to confidently make the leap to 5GHz.

Meraki APs provide the tools to support a smooth migration to greater 5GHz use, without abandoning those devices which are unable to join the party. Perhaps the single most effective step is to configure band steering, which will encourage any device capable of connecting at 5GHz to do so.

Note the new additional setting for minimum bitrate in the 2.4GHz band, another way to ensure best possible performance for newer devices still requiring that band.

Another approach which some Meraki customers choose is to configure one band per SSID. For example, employees or anyone using provided devices, including those centrally managed by the IT team, can be required to use an SSID which only supports 5GHz connections. For everything else, which may include BYOD or guests devices, a separate SSID can be set up using 2.4GHz only (an option our support team will be happy to turn on for any customer wishing to adopt this approach), or dual band with band steering.

If there is a requirement to support both bands in a high density deployment, and more APs are therefore required in a given area, the 2.4GHz radio can be selectively turned off on some APs, leaving 5GHz operational. This allows for a higher AP concentration with less of the co-channel interference issues common on the 2.4GHz band.

With a little planning, your wireless network can be transformed from the traffic chaos in the photo above to something more akin to a racetrack. We look forward to seeing you there! 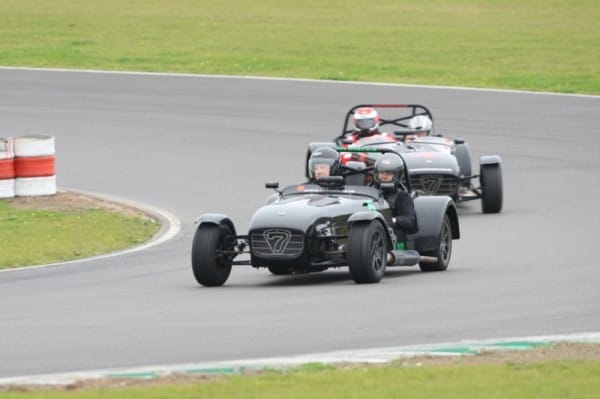