The stampede of Apple iPhone and iPad users to update their mobile devices to iOS7 upon its release in mid-September has been written about extensively (see here and here). Most estimates place the adoption rate at over 50% of total iOS users only a week after the update became available. Considering that rates of adoption for previous iOS versions have been more staid, this is news.

We performed our own anonymized sampling of Cisco Meraki networks to determine what percentage of iPhone and iPad users were converting to iOS 7, and how quickly.  We polled from September 17th through October 7th, and can confirm the results are staggering. 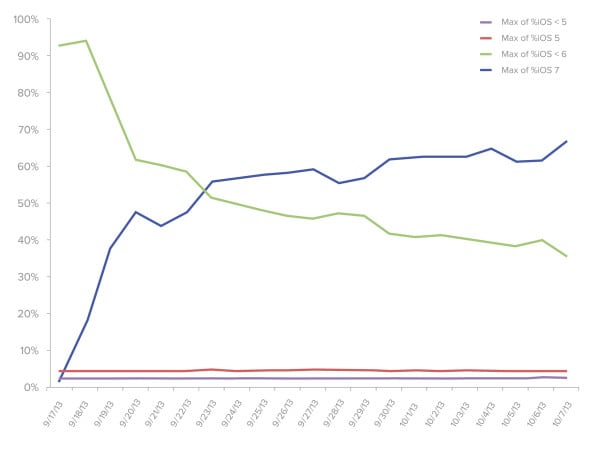 Our anonymized sampling of 50,000 random nodes at different points during each day after the iOS release confirms that iOS 7 adoption reached nearly 50% after only 2 days, and cleared 50% within a week.

As of October 7th, around 67% of iOS users on Cisco Meraki networks had upgraded to iOS 7, while the percentage of devices with iOS 6 installed decreased from about 93% to 36%. These numbers don’t sum to 100% because we sampled different anonymized client devices each time we polled the cloud for information. We’re taking the maximum percentage seen each day for devices running their respective iOS versions, and presenting those numbers here.

What this means for IT admins everywhere

One reason this pace of adoption is news is because the bandwidth spike it caused may have resulted in saturation-induced network outages for several college campuses and possibly other organizations. Depending on the client device and which version of iOS it was upgrading from, the amount of bandwidth needed for the update could be hefty.  For example, a single instance of iOS 7 for the iPhone could weigh in from 750Mb to well over a gigabyte (figures are larger for iPads). If you’ve got more than a handful of concurrent network users trying to download files this size, you could run into issues.

If you receive reports of sluggish network performance — or outright outage — you can easily login to the Meraki dashboard via any Internet-accessible device from any location and make firewall and/or traffic shaping adjustments on the fly. If you aren’t physically onsite to configure application throttling rules, but have access to, say, a mobile phone with cellular or Wi-Fi access to the Internet, you can still make the configuration changes you need immediately.

You can set site-wide or group-based traffic shaping policies on either MX security appliances or MR access points with just a few clicks in the Meraki dashboard. You can set per-device or per-SSID bandwidth limits, throttle entire categories of application traffic (for example, all software updates), or apply rules to specific traffic destinations like apple.com.

You can even apply wireless group policies automatically by device type. So you can apply specific rules to all iPhones and iPads connecting to your wireless SSID — regardless of whether they are BYOD or corporate-owned devices. Meraki APs support this by leveraging their innate device fingerprinting capabilities, so no client software needs to be installed on any device for this to work.

Applying specific policies automatically to devices joining a wireless network — no manual installation needed on the client side.

If you faced an emergency bandwidth situation induced by a handful of devices, you could easily find them by sorting clients by usage on the dashboard’s Monitor > Clients page.  Then simply select the top offenders and temporarily block them from your network.

Selectively blocking one particular iPad from a specific SSID (“CORP”) but not another (“Cats-WiFi”).

These measures (and more) are available to Cisco Meraki customers to manage bandwidth and content flowing across their network infrastructure. When there are sudden spikes in usage driven by specific applications or websites, you can rest easy if you’ve deployed Layer 3-7 firewall and traffic shaping policies to your Meraki network.