Meraki has been revolutionizing the way we think about switches. Our switches can do way more than just switch, and now have even more enhanced security and power saving features. Two of these are Wake-on-LAN and port scheduling. Customers are able to realize huge power savings, security, and manageability benefits with these new additions to the product line.

Time-based SSIDs have been on Meraki wireless products for a while now, and this feature has now made its way to our switch products. Time based ports allow us to disable ports at certain times, and even create multiple port schedules for different use cases. Below we have created an “energy savings mode” which enables ports from 8am to 5pm and disables them at all other times. 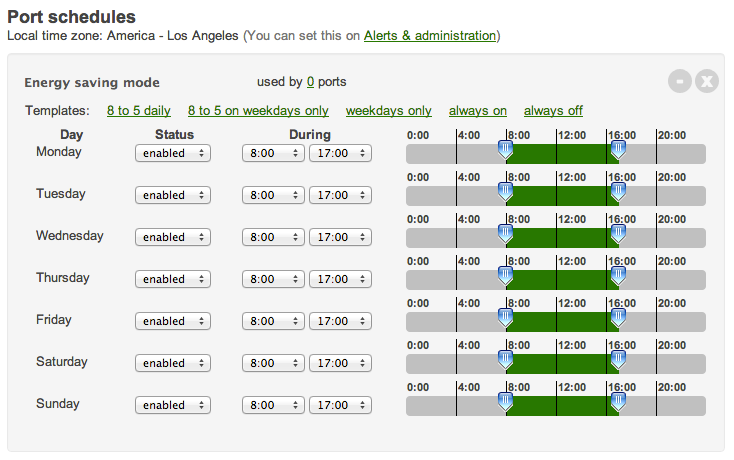 Once a port schedule is created, we can apply it to one or many switch ports just like we have done below.  We even have a templates for commonly used schedules such as 8 to 5 on weekdays only. 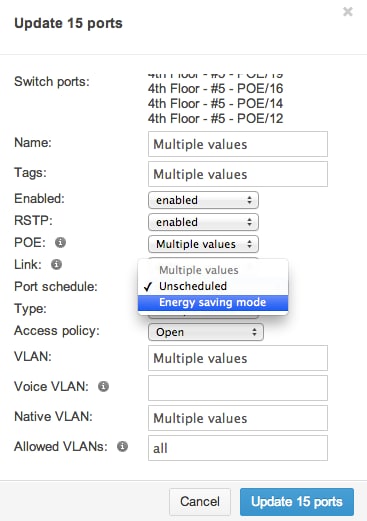 Port schedules provide several benefits, such as power savings. Some customers use time based ports to disable PoE ports powering APs or VoIP phones. This is an easy way of turning off these devices when they aren’t required during non business hours. Another benefit is enhanced network security. We are able to disable ports during times when they are most susceptible to a physical security attack. This prevents malicious users from connecting devices to open switch ports.

Another power saving feature is Wake on LAN, which allows you to power up sleeping or powered down devices. Operation is pretty simple. The Meraki switch sends a magic packet, yes that is the official standard, containing the MAC address and VLAN of the target device.  End devices configured for Wake-on-LAN will be listening for the magic packet even in low power mode.  If the magic packet is received, the effect is just like hitting the power button. From here, you will be able to access resources on the remote device.

Wake-on-LAN allows IT admins to be more flexible while reducing network operating costs. Instead of keeping every device powered up for the off chance it might be needed, we have the freedom to put devices into power saving states, with the confidence that they can still be accessed if needed.

Wake-on-LAN also greatly simplifies manageability of network resources. Without this feature, IT administrators would have to physically be on site to access sleeping devices. Wake-on-LAN allows administrators the flexibility to wake up a device from any location by utilizing the Meraki cloud platform.

Port scheduling and Wake-on-LAN features will begin rolling out to customers in the next few weeks so stay tuned. Check out our other new switch features like traffic analytics and DHCP visibility to find out more.