After months of rumors, leaks, and speculation, Apple’s product announcements today were impossible to miss. The clear star of the show was the iPhone 5 with its bigger screen, LTE, and upgraded camera. If you’ve been following the hype as closely as we were, not much of this was a surprise, but we did find one upgrade particularly interesting: dual-band 802.11n WiFi.

While we aren’t sure what chip the iPhone 5 is going to use, current speculation is that it’s a new version of the venerable Broadcom BCM4330.The 5GHz capability means faster speed connections, but it also brings a few more benefits for your wireless network and the other devices connected to it. First, the 5 GHz band is less crowded than 2.4 GHz. A lot of other devices like cordless phones and microwaves use the lower band and create interference that gets in the way of WiFi signals. On top of that, the 2.4 GHz band has only three channels that don’t overlap with each other. The 5 GHz band is much roomier with many more available channels and less interference. Overall, 5 GHz WiFi means faster speeds on a much more stable connection. As device density increases, 5 GHz capability will lead to much a more efficient network that can pack more users onto a finite number of radio channels. 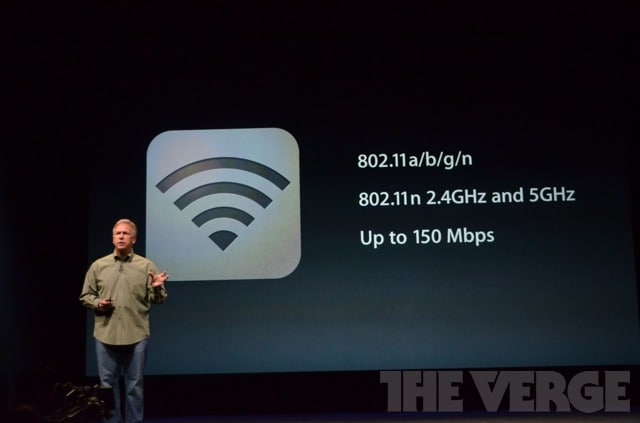 The 2.4 GHz band does beat 5 GHz, however, when it comes to distance. The lower frequency band is able to transmit over much longer distances, but you might start to notice the range limitation of 5 GHz just by moving from one room to the next. That’s why the ability to use both bands is so important: that flexibility can select the right band to maintain the best connection under different circumstances.

Meraki wireless APs have cloud-based channel optimization to optimize channel assignment. Until now, the iPhone had no choice but to use the 2.4 GHz band, but its latest iteration is now equipped to take advantage of the flexible technology in the access points it conects to.

According to Apple, the iPhone 5 will deliver a much faster browsing experience than its predecessors, but it will also make use of more of the available spectrum and avoid crowding bands for other wireless devices. If you need an excuse to make the upgrade, don’t do it for yourself. Do it for the greater good of everyone else on your network.