Part 3: Tips for the event and real-world results

Designing your network properly and choosing the right settings will go a long way towards a successful wireless deployment at a large event. So what to do when the event finally arrives? Don’t wait to see if your wireless fails – be proactive! Here are some tips:

Since there is often significant uncertainty about how many clients will appear and how heavily they will use the network, start with conservative settings and ease them up as the event progresses. For example, start with a 100 kbit/s per-client bandwidth limit, and later raise it to 200 kbit/s.

The Meraki Cloud Controller shows a real-time view of the network’s performance. Keep a close eye on the network as clients begin to show up and be ready to react. Careful monitoring will give you the confidence to know whether a reported problem is a real problem or a client-specific issue. Inevitably someone will tweet that the Wi-Fi isn’t working, but if monitoring of the network shows it is working for 700 people, it is very likely this person is having a client-specific problem.

Go out on the floor and run a speed test at certain intervals, for example, every hour. It’s possible to find issues before users notice them.

Consider using Twitter or another mass communication tool. To some extent, if users are having problems, knowing that someone cares will help. Also, by delivering reports on the network, it’s possible to avoid getting into a situation where one person’s bad experience leads to a general perception that the network wasn’t performing as well as it actually was.

If the event spans multiple days, get a summary of the network’s performance at the end of the day so you can see if adjustments need to be made for the next days. The Meraki dashboard network summary will show you who used the most bandwidth, which APs supported the most users, which APs transferred the most bandwidth, which applications were most used, and the most popular device operating systems and manufacturers. For example, you can use this information to see if you need to add extra APs, throttle specific applications, or take specific action with a user’s device. This is an example of part of the summary report for one day, showing top APs by usage:

Figure 2: Summary of top APs by usage over one day

Meraki provided the Wi-Fi infrastructure that BT used at LeWeb in 2009 and 2010. The Wi-Fi at LeWeb supported thousands of devices that pushed hundreds of gigabytes of data over the air. The deployment environment was challenging as there were often many users in a large, open space. This is a photo of the attendees in the main plenary area. 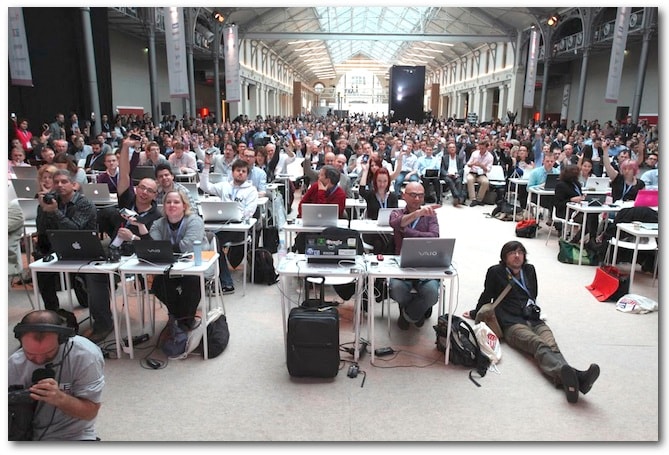 This screenshot shows the floorplan of the event with deployed AP locations and clients connected to each AP.

Not only were thousands of devices supported, but those devices were able to access the network efficiently. Users even collectively consumed a peak of over 350 Mbit/s of streaming video bandwidth! If you’re interested in more details about the LeWeb conference, check out the case study.

This wraps up the final installation of this 3-part series on successfully deploying Wi-Fi at large events. We hope you use these tips at your next event, and if you do, give us a shout and let us know.

Some photos courtesy of LeWeb.