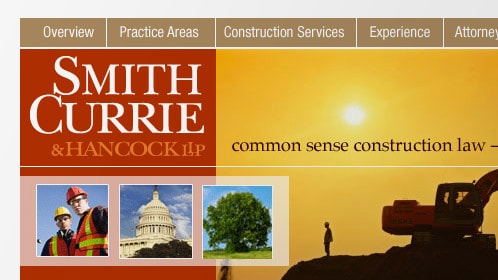 Since 1965, Smith, Currie & Hancock LLP has been a leader in construction law. Today the Atlanta-based firm has five offices nationwide and employs 55 attorneys who are constantly on the move with their laptops—and who expect the wireless to simply work.

“These guys are heavy conference room users,” said Steve Swaney, Director of Information Technology at Smith, Currie & Hancock LLP. But the haphazard combination of standalone access points (APs) from Netgear and Linksys scattered around the Atlanta office precluded a seemless experience. “It was a real pain for everyone to go from one conference room to another, disconnect, and then have to reconnect to another zone,” Swaney explained.

Additional wireless challenges thwarted the two-person IT team. The APs frequently failed and required weekly restarts. And when an AP stopped working at a remote office, it had to be shipped back to Atlanta. “I’d reconfigure it and overnight it back,” Swaney said, “but they had nothing in the meantime.”

Network speed was also a significant issue. Though the APs supported the faster 802.11n standard, they had a single radio that also served slower 802.11b/g clients. “Somebody would connect with g speed and ruin it for everybody else,” Swaney said.

When Smith, Currie & Hancock LLP decided it was time for an upgrade, law firm IT specialists Client Profiles recommended Meraki.

Meraki’s affordable wireless LAN solution offered seamless and reliable office-wide coverage, high-speed dual-radio 802.11n performance, remote configuration and monitoring, as well as an isolated network for visitors. “We didn’t have an isolated guest network, and it was always a huge concern in the back of my mind,” Swaney said.

Smith, Currie & Hancock LLP deployed seven Meraki MR14 APs in Atlanta and Washington, DC. “The deployment was amazingly easy,” Swaney said. “I spent five minutes perusing the software and it seemed pretty easy to figure out, but I thought, nah, this will still be more difficult than I’m expecting.”

To Swaney’s surprise, he encountered no challenges. “I had the first one up and running in 15 minutes, and subsequent units literally as fast as I could unbox them and plug them in,” he said. “It was just amazingly easy—that’s the only phrase I can think of that truly does it justice.”

Before unplugging the old APs, Swaney performed some speed tests and found he was never able to connect at faster than 54 Mb/s. “But the first Meraki I hooked up to, I was connected at 300 Mb/s!”

It was just amazingly easy—that’s the only phrase I can think of that truly does it justice. Steve Swaney, Director of Information Technology

With IT staff only in Atlanta, the centralized network management through Meraki’s Enterprise Cloud Controller proved particularly convenient. “I shipped this thing to DC and all they had to do was plug it in, that’s it,” Swaney said. “And I can handle everything from here. The more I can do remotely myself, the smoother things are.”

With two mouse clicks, Swaney enabled a virtual, isolated network for the 15 or more visitors Smith, Currie & Hancock LLP sees each day. “To me, that feature is huge,” Swaney said. Meanwhile, the high-performance DHCP servers built into Meraki APs allowed Swaney to work around his dwindling supply of IP addresses by enabling Network Address Translation (NAT) in the access points.

Swaney occasionally uses Meraki’s intuitive web-based map feature to monitor usage around the office and reposition APs in high-traffic areas. “But really, you set it and forget it,” he said. “I haven’t had to go around and restart these things. I don’t get phone calls that the wireless isn’t working in conference room 8 or that someone keeps getting disconnected. I don’t hear that stuff.”

In a post-deployment email to his contact at Client Profiles, Swaney wrote, “This is too good to be true. These things absolutely rock!”

It was just amazingly easy—that’s the only phrase I can think of that truly does it justice.