Given the thousands of innovative education applications designed specifically for tablets as well as the integrated learning experience such apps can offer, it’s no wonder that iPads and other mobile devices are entering K-12 schools at an aggressive rate. In some cases the schools have rolled tablets out to every student, and in other cases students and teachers are bringing personal devices from home. Either way, schools are upgrading their wireless networks to accommodate the influx.

Red Lion Area School District in Red Lion, Pennsylvania and Rainbow District School Board in Northern Ontario, Canada both recently upgraded their networks to better support iPads and other mobile devices. The chief concerns, of course, are higher demands for bandwidth and the need for stricter network security.

Red Lion Area School District (RLASD) deployed over 120 Meraki 802.11n access points (APs) across 11 locations, with the largest number of APs at the 3000-student senior high school. “We needed a wireless solution with centralized management that was customizable,” said John Lenhart, Network Manager at RLASD. “We also needed something affordable but that still had enterprise-level features like active directory RADIUS authentication and the ability for a protected guest network.”

Lenhart explained that RLASD didn’t have the budget for a 1:1 initiative and therefore wanted to allow staff and students to bring in tablets and mobile devices from home—but still wanted to be able to protect the network with port filtering and AD authentication. Meraki’s cloud-managed solution enabled Lenhart to create separate SSIDs for district-issued devices vs. personal devices while also utilizing splash login pages, SSID schedules (only broadcasting the network during school hours), and NAC for added security.

Lenhart can also see what devices are authenticating and who is doing what. Macs, PCs, iPads, and iPhones have all joined the network with no problems, though Lenhart is keeping an eye on his bandwidth. The RLASD network is averaging nearly 200 GB/week. “We’re using Meraki Traffic Shaper to throttle down the student networks a little bit,” he said. 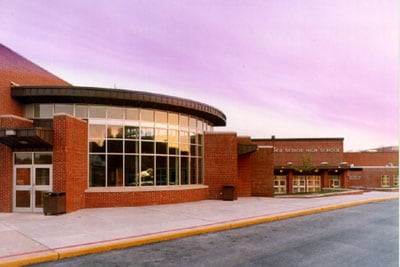 “The high school is really leaning on the wireless with a lot of devices.” –RLASD Network Manager John Lenhart

Rod MacLeod, Manager of Information Services at Rainbow District School Board, also praised Meraki’s Traffic Shaper as a way to prioritize bandwidth for learning activities at the district’s nine high schools. “Application shaping is the future of how things will work, rather than the old days when we tried to do everything by port,” he said.

Like Lenhart, MacLeod chose to upgrade his network to meet increased demand. “We had provided laptops for teachers, and more students were bringing personal laptops, iPhones, and iPads to school,” he said.

At the same time, he had concerns about his inability to monitor or limit the network traffic occurring on these portable devices. Rainbow’s deployment of 157 Meraki 802.11n access points across nine high schools provided greater capacity in conjunction with centralized management and more sophisticated insight and control.

To read more about Rainbow District School Board’s deployment, check out the case study. If you want to prepare your school for the iPad and its interactive learning applications, check out the Meraki iPad web page, or register for the iPad webinar.